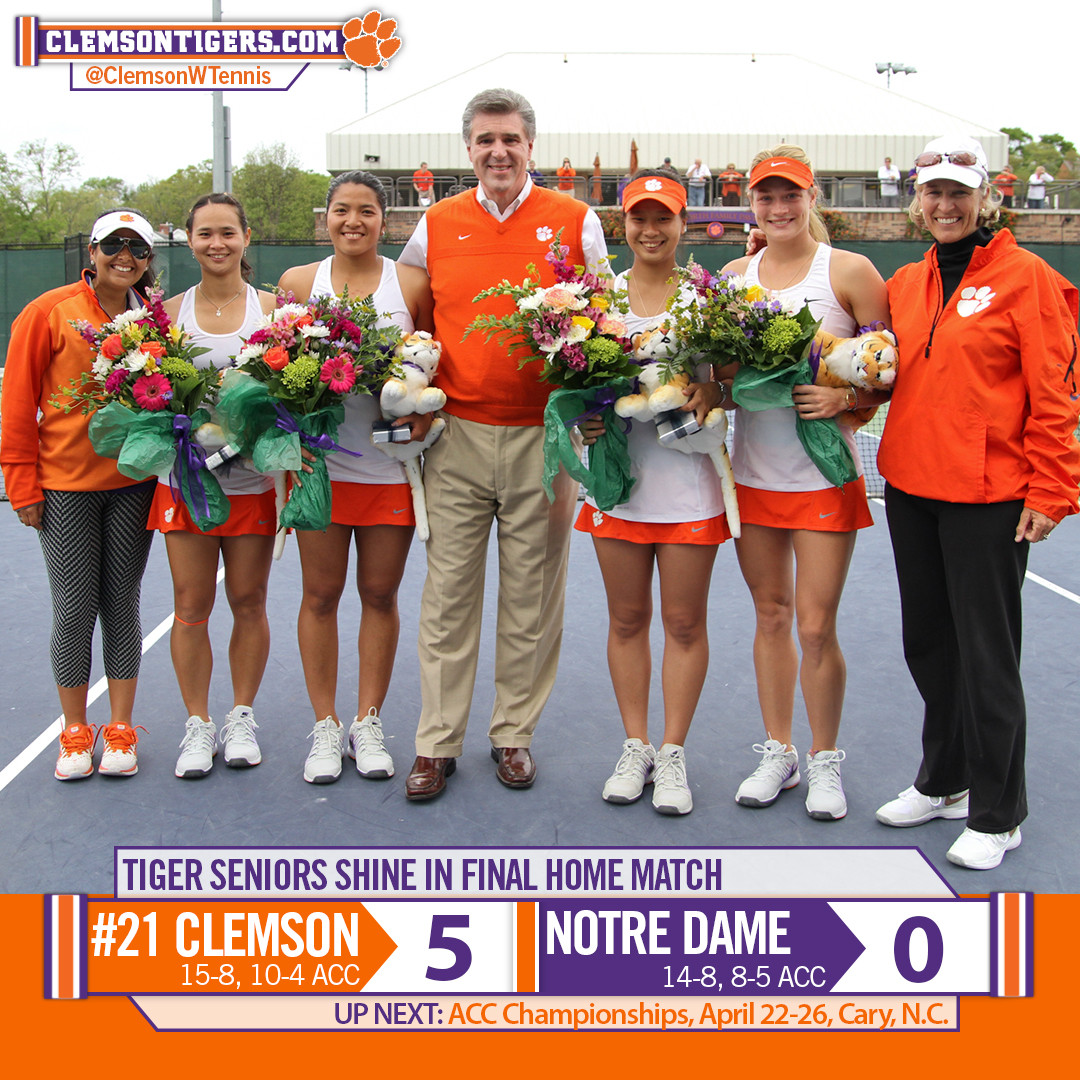 CLEMSON, S.C. – Thanks to wins from Clemson’s top four singles players, the 21st-ranked Tigers defeated No. 33 Notre Dame 5-0 in Clemson’s final regular season match of the season on Friday. The match was Senior Day and Beatrice Gumulya, Romy Koelzer, Yuilynn Miao and Jessy Rompies were honored prior to their final match at the Hoke Sloan Tennis Center. With the win, the Tigers impoved to 15-8 overall and 10-4 in ACC play, while Notre Dame fell to 14-8 and 8-5 in conference play.

After an emotional senior day ceremony, the Tigers got out to a fast start in doubles. Tristen Dewar and Gumulya, playing together for the first time all season, started off with an 8-2 win at No. 3. Rompies and Miao, also playing together for the first time this season, then defeated their opponents 8-4 at No. 2 to clinch the doubles point for the Tigers. Koelzer and Joana Eidukonyte were up 6-5 over the duo of Gleason and Robinson, who are ranked 22nd nationally, when play was halted.

After beginning singles play outdoors, officials moved the match indoors because of rain. The venue didn’t matter, as Clemson’s momentum continued in singles play as the Tigers quickly jumped out to leads on all four courts. No. 59 Gumulya won 6-3, 6-1 at No. 2 to extend the Tiger lead to 2-0. Gumulya has now won eight consecutive matches, the longest winning streak on the team, and moves to 26-8 on the season and 11-3 in conference play. Eidukonyte, ranked 14th, won 6-3, 6-0 at No. 3, then Dewar clinched the match for the Tigers with a 6-4, 6-3 win at No. 4. Eidukonyte is 31-6 on the season and 11-2 against conference foes. Koelzer defeated her Notre Dame opponent 6-2, 6-2 on Court 1 to finalize the shutout.

Clemson returns to the courts April 22-26 at the ACC Tournament in Cary, N.C. Draws for the tournament will be announced Sunday evening.