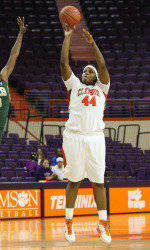 TALLAHASSEE, FL – The Clemson Lady Tigers fell short at Florida State on Thursday by a 59-47 count at the Donald L. Tucker Center in Tallahassee in their ACC road opener. Three Clemson (4-9, 0-2 ACC) post players finished in double figures despite flirting with foul trouble most of the evening. Florida State (9-7, 1-1 ACC) won a sixth straight over Clemson, who returns to Littlejohn Coliseum for a Sunday matinee.

Lindsey Mason had 14 points (7-9 FG) to lead Clemson, and had four boards and two blocks in 19 minutes of action, while Quinyotta Pettaway and Shaniqua Pauldo had 10 points apiece.

Clemson had another solid defensive performance, holding a third consecutive team below 60 points, as Clemson held the Seminoles 12 points below their season scoring average. The Lady Tigers forced 23 turnovers in the game, while committing 19. Florida State hit 12-25 from the line, while Clemson hit just 3-6 attempts from the line, four of which came in the final five minutes.

Cierra Bravard and Alexa Deluzio scored 16 points apiece to lead all players. Clemson controlled much of the paint offensively, grabbing 17 offensive boards and outscoring the Seminoles, 32-26 in the paint. Clemson struggle from behind the arc, missing each of their nine attempts, but made an effort to shoot inside, taking 56 shots around the paint.

Clemson relied on a strong inside presence in the first half, scoring their first ten points in the paint in taking a 10-6 lead in the first five minutes. Clemson went to Pauldo often, and the senior hit 5-12 from the floor in the half for ten points.

A 15-0 run by Florida State came after the Lady Tigers’ 10-6 edge over the next six minutes, but Clemson righted the ship to pull within four at 25-21 with 3:11 to play, a 15-4 run, fueled by eight from Pauldo. However, Florida State locked down, and didn’t allow another Clemson hoop for the duration of the half, going into the break at 30-21.

The Seminoles were unable to capitalize on Clemson’s foul trouble, as the Tigers had four players with two or more fouls, but the `Noles were just 5-14 at the line, while Clemson was 1-2. Where FSU did hold an edge was on points off turnovers. Clemson made just eight turnovers, but the Seminoles hit for 12 points of those miscues.

Clemson stayed within 12 for the duration of the second half, cutting the deficit to six on several occasions, but couldn’t crack through that barrier despite several exhilarating runs and nifty passes, but weren’t able to convert.

The Lady Tigers hit .444 percent from the floor in the second half, while holding Florida State to just .345 in the frame.