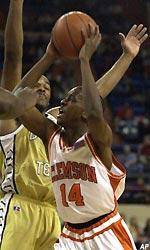 Chey Christie had a career-high 25 for the Tigers, who handed Georgia Tech its eighth-straight loss on the road this season.

The Yellow Jackets (11-8, 4-4) had plenty of time to recover, but could not. Ed Nelson lost possession, which led to a tie-up situation with the arrow pointing Georgia Tech’s way.

They inbounded one last time, but Marvin Lewis’ 3-pointer with Scott in his face bounced away as time ran out.

Jarrett Jack and Chris Bosh had 15 points apiece for Georgia Tech. B.J. Elder, who came in averaging 16 points a game, was held to 10 on 4-of-11 shooting.

It was the first time Clemson had scored more than 60 points since it last victory, 78-77 over Virginia on Jan. 18.

It was all Christie for Clemson early on. He had 10 points as the Tigers built their biggest lead in an ACC game this year, 24-11.

But Tech slowly chipped away. Bosh’s three-point play capped an 18-8 run that cut the lead to 32-29.

Elder, shooting two foul shots for Bosh as he was attended to for a bloody nose, put Georgia Tech ahead 55-54 for the first time since it led 2-0.

The Yellow Jackets retained the lead until Scott’s final bucket.

Scott’s two free throws drew Clemson even at 65-all. Then, after Nelson made two foul shots for Georgia Tech, Tomas Nagys tied it for the last time with a pair from the line.

Lewis missed a 3-pointer attempt after that to give Clemson the ball back.

Scott, a fearless senior who’s Clemson’s top scorer this year, took the inbounds pass, dribbled left across the circle, then back around right to drill the winning shot.