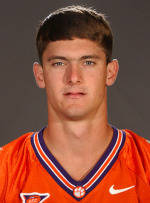 Scott served as wide receivers coach at Presbyterian this past year where he helped the Blue Hose to a 6-5 record in their first year as an NCAA member. Prior to that he was the head coach at Blythewood High School near Columbia where he led the team to the State AAA Championship in his only year as head coach. His team had a 14-1 record during that 2006 season, the programs first year of existence. In 2005 he coached the Blythewood junior varsity team to a 10-0 record. In 2003 and 2004 he served as an assistant coach at Ridge View High School.

Scott was a math major at Clemson and earned his degree in May of 20003. Jeff is the son Clemson associate head coach and offensive line coach Brad Scott.