Clemson, S.C. – Robbie Robinson, a junior forward for the Clemson men’s soccer team, has decided to forgo his remaining season of eligibility and pursue professional options in the 2020 MLS SuperDraft. The MLS announced earlier today that Robinson is one of four members of the 2020 class of Generation adidas signees. 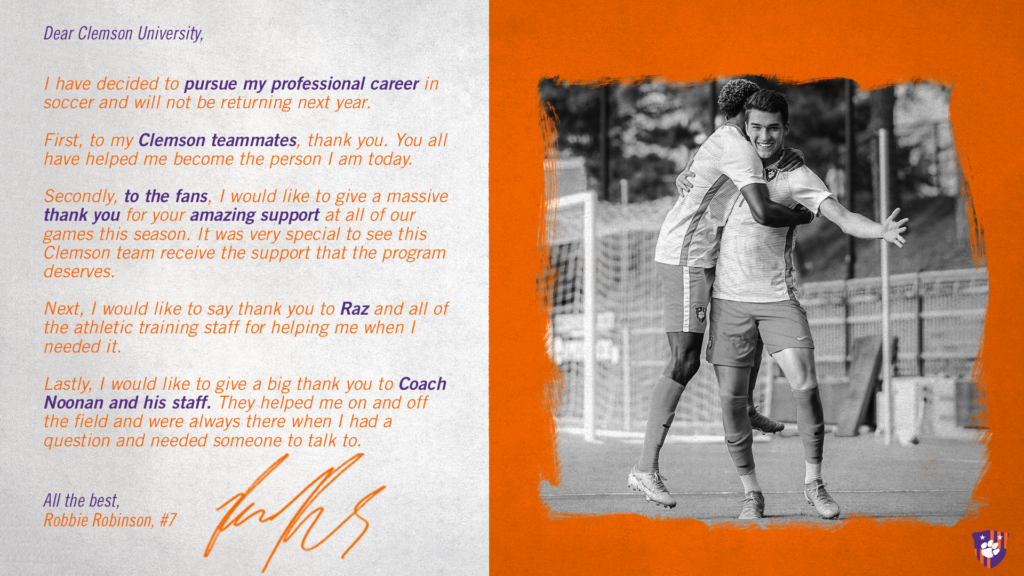 “We are proud of Robbie’s accomplishments in the context of our team’s success this year. His journey at Clemson is a fantastic success story. Like with many of our athletes, when the opportunity presents itself to proceed to the professional level, we do our best to advise and assist in this process. If Robbie continues his current progression, I expect he will have a very successful professional career. We wish him well!”

The decision from Robinson comes after compiling one of the finest seasons in program history, with the junior scoring 18 goals, contributing nine assists and tallying a nation-leading mark of 45 points. Robinson’s spectacular season garnered him honors as a MAC Hermann Trophy Finalist, First Team All-American, First Team All-South Region, ACC Offensive Player of the Year and a two-time ACC Offensive Player of the Week. Robinson was named the third-best player in the country by TopDrawerSoccer.com earlier this week.

Robinson’s career at Clemson comes to a close with a total of 58 points accumulated off of 24 goals and 10 assists. Robinson’s 2019 season stats made him the nation’s outright leader in points and points per game, along with placing him in a tie for first for goals and penalty kicks. Robinson has top-25 single season marks in Clemson’s program record book for goals (tied-nineteenth) and points (tied-fourteenth).

With yesterday's Hermann Trophy announcement, we thought we'd give you 1⃣8⃣ reasons why Robbie Robinson has been the 𝘽𝙀𝙎𝙏 player in the country this year.

We even wrote an article if you still don't believe us! 😎⬇️
📰: https://t.co/sjdOz6qnLe#ClemsonUnited pic.twitter.com/asxa3YvWOA