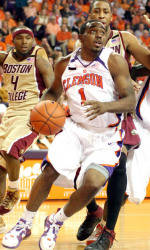 Greensboro, NC – Clemson guards K.C. Rivers and Cliff Hammonds were among the players selected for the All-ACC teams announced on Monday by the Atlantic Coast Sports Media Association (ACSMA). Rivers was a second-team selection, while Hammonds was a third-team choice by voters.

Rivers, a junior from Charlotte, NC, was announced by the NABC as a second-team All-District V selection last week. He is one of five players in school history with at least 200 three-point goals and ranks among the top 25 on the Tigers’ all-time scoring list with 1,167 points. He tied a school record with eight three-pointers at Virginia in a road win earlier this season.

Hammonds is second on the team in scoring at 11.7 points per game, but he increased his output to 13.1 points per game during conference play. He ranks second in the ACC in assist-to-turnover ratio (2.33), third in steals per game (1.93), and seventh in assists per game (4.03). Hammonds received honorable mention for the ACC’s All-Defensive team as well Monday.

Hammonds is one of only five players in ACC history with at least 1,400 points, 400 rebounds, 400 assists, and 200 steals in a career. The senior from Cairo, GA ranks in the top 10 in Clemson history in games, starts, minutes played, three-point goals, steals, assists, and assist-to-turnover ratio. He has started a school record 126 consecutive games. Terrence Oglesby was named honorable mention All-Freshman. The sharpshooter from Cleveland, TN has amassed a Clemson freshman record 77 three-point goals this season, breaking the existing mark of 75 set by Tony Stockman in 2000-01. Oglesby is averaging 10.6 points per game and shooting 41.6 percent on three-point attempts. He hit the game-winning three-pointer with 2.3 seconds left in the Tigers’ record-breaking, 20-point comeback win at Maryland.

James Mays garnered honorable mention for the league’s All-Defensive team for the second straight year. He ranks fifth in the ACC in steals per game (1.84) from his power forward position. Mays holds the Clemson career record for steals (162) by a frontcourt player and also ranks among the top 10 in school history in blocked shots (92).