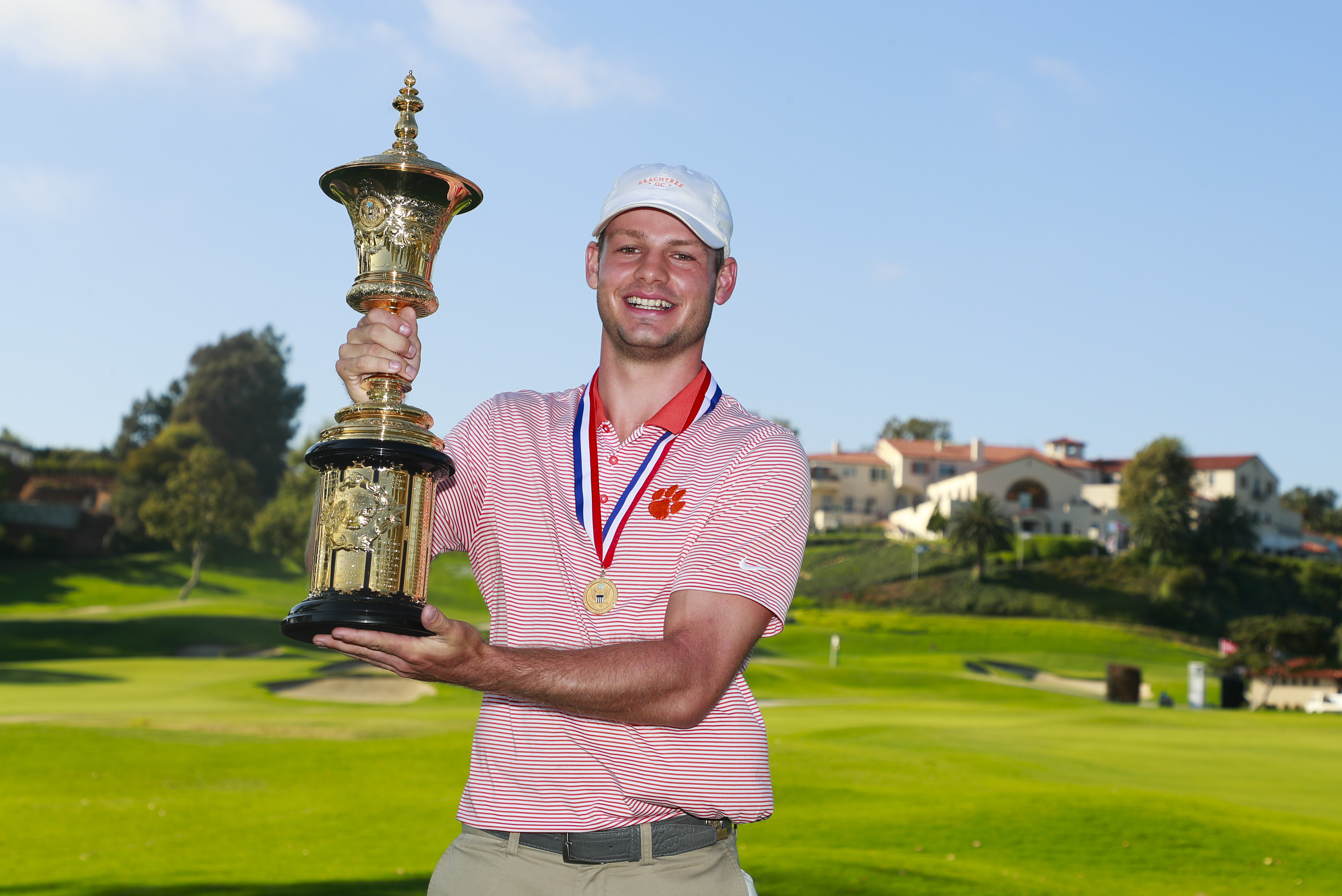 Redman joins Chris Patton as the only Clemson golfers to win the United States Amateur. Patton won the title in 1989 at Merion Golf Club in Ardmore, Pa.   Patton’s son Colby will be one of Redman’s freshman teammates on the Clemson team this year.

Redman was two-down to Ghim with two holes to play.   But on the 17th hole, the 35th hole of the match, Redman rolled in a 50-foot eagle putt to cut the margin to one-down.   He then hit his second shot on the 18th hole to seven feet right of the cup and made that putt for birdie to square the match.   It was the third consecutive match that Redman won the 18th hole to either win the match or send it to extra holes.

The match then returned to the 10th hole for the third time of the day. Redman hit his drive on the 300-yard hole just short of the green.   Ghim hooked his drive into the trees on the left and his second shot went into a greenside bunker. With a downhill lie, Ghim hit his third shot into a bunker on the other side of the green. Redman hit his second shot eight feet past the hole.   After Ghim missed his putt for bogey he conceded the hole and the match.

It was a remarkable comeback for Redman in the championship match and the entire week.   When he finished his second round of the stroke play qualifier at 12:30 p.m. on Tuesday with a score of 144, four over par, he was in 91st place. But the conditions at Riviera and Bel-Air Country Club became more challenging and 34 players dropped below Redman, allowing him to tie for 57th at the end of the day.

Redman came back Wednesday morning for a 13-man playoff for eight spots. The freshman All-American made a par on the 10th hole, the same hole he clinched the match with on Sunday, to advance to match play as the No. 62 seed.     He then won six consecutive matches to capture the championship.

As the No. 62 seed, Redman is the second highest seeded player to win the US Amateur since the seeding process began in 1985. Steven Fox was the No. 63 seed when he won the championship in 2012.   Redman, Fox and Edwardo Molinaro (2005) are the only U.S. Amateur Champions to reach match play through a playoff.

Redman held a 1-up advantage after the morning 18 holes. Both players were on their game in that Redman shot a 66 on the opening 18 and Ghim had a 67. Redman had a streak of 12 consecutive one-putt greens in the morning, including all nine holes on the back nine.

Redman took a 2-up lead with a birdie on the 20th hole, the second hole on the course. But that was the last hole he won until the 35th. Ghim was masterful in every aspect of the game, especially putting, and he won four holes, including the 34th, to take a two-up lead with three to play. That is when Redman started his streak of three consecutive holes with eagle or birdie to win the match.

“This was a gutsy performance and about not giving up,” said Redman after the match. “It was a terrific match. Doug played great. It just shows hard work pays off. This is a championship for everyone who has helped me.”

After the conclusion of the match, Redman was announced as one of the 10 members of the United States Walker Cup team that will compete against a team from Great Britain and Ireland back in Los Angeles September 9-10. Redman is the first Clemson golfer to make the Walker Cup team since Kyle Stanley in 2007.

“I could not be more proud of Doc,” said Clemson Head Coach Larry Penley, who also coached Patton in 1989. “Doc is a mathematician, which means he never gets ahead of himself. He follows a process and that really helped him, especially when he got behind. He just stayed the course.”

Redman’s March to US Amateur Championship

THE MODERATOR: Pleasure to welcome the champion of the 117th U.S. Amateur Championship, Doc Redman, a 37-hole winner over Doug Ghim. Give you the same option I gave Doug. Do you want to make a comment or go right to questions

DOC REDMAN: I would just like to congratulate Doug as well. He played awesome. He’s such an awesome competitor and guy and deserves all the praise in the world as well.

DOC REDMAN: I would so no, because especially in that first round we were both playing so well. I played really well on that back nine, and he stuck with me shot for shot; I stuck with him.

Then the wind picked up on the second 18th and it was a totally different game really. We both just hung tough. I think we both played really well.

DOC REDMAN: Yeah, I always have a lot of confidence from mid-range really. When I see one go in I definitely get big eyes and I know that I can make anything.

That’s what happened today. It was a really special putting day obviously.

DOC REDMAN: Yeah, I wasn’t a great putter. My stroke wasn’t very good. I made it a point to work on my stroke and make it better and really be able to hit the ball where I’m looking, where I want.

And you know, just like anything. I just had to put in a ton of hours, and it’s paying off obviously.

DOC REDMAN: I think I just did it one day as part of a routine, something I do to get comfortable over the ball and it’s stuck with me

You know, it’s the routine. Try to stay consistent.

DOC REDMAN: Let’s see, on 7 I hit — I thought I hit a really good putt and it just turned a little more than I thought. Was this in the morning?

Yeah, the morning, yes. I remember 3; 3 was an awful stroke. I just kind of didn’t trust it.

8 I hit a great putt too. That hole was in a tough spot on a hill and just took a lot more break. I really learned from it in the afternoon round, which helped.

Then 9 wasn’t the best stroke either.

So it was frustrating, but I knew that I was hitting great shots and eventually they would drop.

DOC REDMAN: I didn’t even think about it really. All that was going through my head was about making the putt and putting a good stroke on it.

DOC REDMAN: Yeah, I hit it well. I did think I hit it a little firm. It was on a good line, so I wanted to get a better angle at it.

That’s really why I kind of stepped over to the right.

DOC REDMAN: I don’t know either. You would have to ask my dad.

(Off microphone.) He was Doc from conception. There was never a time well before he was born that he wasn’t Doc. Even if he was a girl he would’ve been Doc. (Laughter.) It’s not even a nickname. Not even close. It’s always been perfect.

THE MODERATOR: Any more questions? You’re sitting next to the item that everybody wants to be associated with when they sign up for the U.S. Amateur. Now your name will be on it. Tell us with what that means to you.

DOC REDMAN: It’s incredible to add my name to the list of all the incredible champions already and to have conquered arguably the best field in amateur golf in a really difficult grind, too.

I beat some of the best players in the world, and I hope that this can catapult me up into that conversation as well going forward.

DOC REDMAN: Yeah, I don’t think he would’ve. I think, you know, I worked really hard with two guys in particular, Cory Schaffer and at Milt Louder (ph) at Clemson, and I’ve read a few book as well.

I learned a lot about being positive and how you can mentally change the outcome of things and how it makes such a difference. That really led to me being very positive and reassuring of myself.

DOC REDMAN: Two of our mental coaches at Clemson.

DOC REDMAN: Man, none in particular really. Just I’ve read four or five. Honestly can’t remember the names right off the top of my head.

I really enjoyed reading them and I think you can learn a lot from them not only in golf, but just in daily life.

DOC REDMAN: You know, no. I just wanted to kind of reassure myself on my stroke and make sure that I was stroking it well going forward, I guess.

I hit a good putt on 16. I just hit it too hard. I had it read right. The line I picked really needed to be a soft pace, and I hit it firm.

DOC REDMAN: Yeah, when I got up there, occasionally I look at a putt and I see a line right away and I like it. That kind of happened there. When I hit it I knew I put a good stroke on it.

I was pretty confident it would have a chance. I wanted to get a more down-the-line look at it, so I just took another look.

DOC REDMAN: I do. We talked a lot about outlets of pressure, too, how to deal with that. I try and combat a lot with just my breathing and trying to stay calm that way, lower my heart rate.

Also just trying not to make any putt or shot bigger than it really is. I’ve tried a lot to make all 10-footers equal no matter if they’re to win the match or to stay alive in the match, because I think that makes a huge difference as well.

DOC REDMAN: I think that’s a great quote, yes. Yeah, if you get here, it is a privilege to feel that pressure coming down 18 with a chance to send it to extra holes.

It was a privilege on 10 on the extra hole to have a chance to win. I was just very honored to have the chance and pressure. I enjoy it very much.

DOC REDMAN: I just wanted to get through because I knew if match play came that I could do it, you know, I could win some matches and advance.

DOC REDMAN: Somewhat. I was 4-down through 9 at the Western Am. It was a lot less dramatic than this. I kind of just chipped away at Norman’s lead. Hit some really good shots down the stretch. They were tough holes as well.

I lipped out on 18 to win. Norman and I played a great four playoff holes and he got me on the fourth one. It was really an honor to be able to come back from that and send it to extras like today.