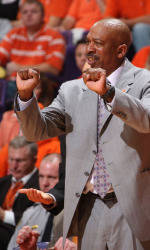 Clemson men’s basketball coach Oliver Purnell will have his jersey number 22 retired this Friday in a ceremony held at Stephen Decatur High School in Berlin, MD. Purnell, a 1971 graduate, will be presented a framed number 22 jersey during halftime of the school’s football game at Seahawk Stadium.

Purnell led Decatur’s 1970 team to a state championship in boys’ basketball and went on to an outstanding collegiate career with the Old Dominion Monarchs in Norfolk, VA. Purnell totaled 1,090 points and 476 assists while leading the Monarchs to a Division II national championship in 1975.

He has been a Division I head coach for 20 seasons, including the last five at Clemson. During his time with the Tiger program, he has accumulated an overall record of 94-68. Clemson has posted a school-record 49 wins over the past two seasons under Purnell’s watch. Last season, Purnell’s team went 24-10 and advanced to the NCAA Tournament for the first time in 10 years. He also coached the Tigers to the championship game of the ACC Tournament, a feat previously accomplished only once by Clemson in the 55-year history of the conference.