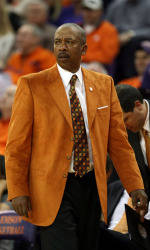 Clemson, SC – Clemson Head Coach Oliver Purnell was named District III Coach-of-the-Year by the U.S. Basketball Writers Association (USBWA) on Tuesday. Purnell has guided the Tigers to a 23-7 overall record this season and his team is ranked #17 in the latest AP poll and #18 in the coaches’ poll. District III for the USBWA includes the following states: North Carolina, South Carolina, Virginia, and Maryland.

With the Tigers’ 23 wins this season, Purnell has taken the Clemson program to three straight seasons of at least 20+ wins. It marks the first time in school history Clemson has had three straight 20-win seasons. Purnell owns a mark of 117-75 in his six years with the Tiger program, which equates to a .609 winning percentage. He is the winningest coach in school history on a percentage basis.

This season, the Tigers finished fifth in the ACC with a 9-7 league record. It marked the first time since 1965-67 that Clemson produced back-to-back winning records in ACC play. Chief among Clemson’s conference wins was a 74-47 upset of #3 Duke at home on Feb. 4. It was Clemson’s largest margin of victory versus a ranked opponent. Clemson has won a school-record seven ACC games by double digits as well.

A telling sign of Purnell’s progress with the Clemson program has been the national polls. Clemson has been ranked in the top 25 of both major polls for 13 consecutive weeks. The Tigers first earned a top-25 ranking on Dec. 15, and were ranked as high as #9 in the ESPN/USA Today poll at one point this season.