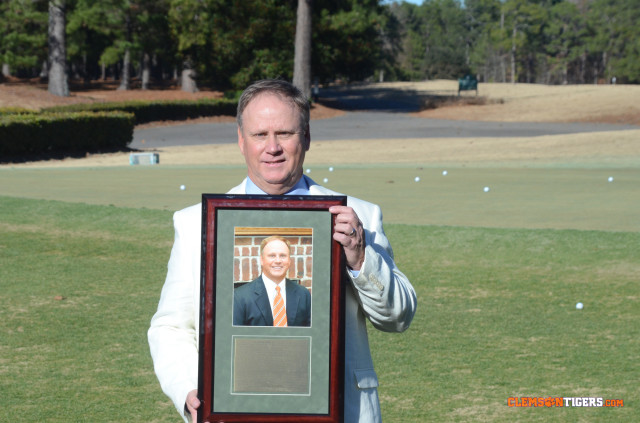 Clemson, S.C.—Former Clemson All-American Dillard Pruitt was inducted into the South Carolina Golf Hall of Fame on Saturday. The ceremony took place at Columbia Country Club. Pruitt was the 68th person to be inducted, the third from his family.

Pruitt was Clemson’s first two-time All-American, as he was honored after the 1983 and 1984 seasons. He was also a three-time first-team All-ACC selection.  In 1982 as a sophomore, he helped Clemson to its first ACC championship in men’s golf. In 1983 the Tigers finished fifth in the nation, the first to 5 national finish in the history of the program.

As an amateur, Pruitt won the 1982 South Carolina Amateur and the Sunnehanna Amateur in 1983. He was inducted into the Clemson Athletic Hall of Fame in 1998 and was named to the ACC 50-Year Anniversary team in 2003.

The native of Greenville, S.C. became the first former Clemson golfer to win a PGA Tour event in 1991 when he won the Chattanooga Classic.   He played on the PGA Tour for nine years (1988-96) and finished in the top 100 on the money list for six straight years. He finished 13th at the 1992 Masters, still the second best finish by a former Clemson golfer at the famed tournament in Augusta, Ga.

In 1996 he retired from the PGA Tour and is now in his 20th year as a rules official on the PGA Tour.

Pruitt made many comments about his Clemson career during his acceptance speech last Saturday afternoon.

“I don’t have a lot of trophies in my house, but one I have always kept is the 1982 ACC Golf championship at Clemson,” said Pruitt.

“We had a special group of guys. We weren’t the greatest team, but we all got along and had a common goal to succeed as a team. Clemson is a very special place and will always be a special part of my life.

“I can’t thank Bobby Robinson enough for his impact on my life.   He recruited me and was my coach my first three years.   Clemson has had a lot of success in golf. Larry Penley was my teammate when I was a freshman and he was a senior (1980). He was then my head coach when I was a senior (1984).

“Larry has had a great career winning the national championship (2003) and nine ACC titles. A lot of what he learned came from what Bobby Robinson established.”

Pruitt is the third member of his family to be inducted into the South Carolina Golf Hall of Fame. His uncle, Dillard Traynham (for whom he is named) and brother-in-law Jay Haas, have been inducted previously.