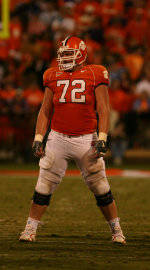 He may just be the most versatile lineman in the ACC. Roman Fry, also known as the “Hurricane,” has seen time at center, guard, and tackle over the last four years in a Tiger uniform. The 6’4″, 300-pound fifth-year senior from Ironton, OH settled into the offensive guard position this year, but he is always ready and willing to go wherever the team needs him.

“It may be nice to play one position, but that’s not how I help the team,” Fry said.

This Clemson offensive lineman has benefited from a diverse athletic background. He began his athletic career as a swimmer in West Virginia. Little league football coaches told his father Ed that he was too big to play with the guys in his age division. His father then decided that Fry would not play up with the older boys.

Instead, he enrolled him in karate and soccer to jumpstart his athletic career. Ed, now a high school coach, concluded that this would benefit him in the long run moreso than jumping in with the older, more experienced players. These other athletic experiences helped Fry practice proper body control, contact leverage, and the precise footwork that he would later need to be a standout football player.

Swimming on a regular basis turned out to be one of the best things for Fry’s football career. He spent the majority of four years learning how to use his entire body, combining the strokes of his arms with the kicking of his feet. These instincts molded him into a flexible, multi-talented athlete, landing him numerous scholarship offers. It also allowed him to acquire the exceptional ability to play all five positions on the offensive line.

During his senior year at Ironton High, Fry rotated at offensive line, tight end, defensive line, and special teams. He stood only 6’0″ and weighed 240 pounds. Needless to say, it was not easy getting recognized to play on the offensive line, which was where he really wanted to be.

Florida Head Coach Urban Meyer, who was then at Bowling Green, told him he would probably be too small to play football in the Mid-American Conference. Notre Dame wanted him to join its program, but only as a defensive player, while Cincinnati recruited him to play tight end. Ohio State and Purdue also sought out Ohio’s #23-rated prospect.

The two schools that fit Fry’s interests and future goals, however, were West Virginia and Clemson. After recruiters met with his father, it was very evident that Fry had another growth spurt on the horizon and would be big enough to compete at the Division I-A level. “They looked at my dad, who weighs 360 pounds, and they said I would be big enough to play,” #72 laughed.

Immediately after his visit to Tigertown, Fry knew that this was the college for him. The combination of the great Clemson tradition along with the impressive athletic facilities and reputation hooked this Ohio native.

Over the years, Fry’s father has been the biggest influence on him. Ed has been able to instill more than enough insight and wisdom over the years, because he has held positions in strength and conditioning, as well as a football, basketball, and track coach. He always worked his son hard, but he made sure he was a well-rounded athlete. To be the best, Fry had to be more than just a standout lineman.

Clearly, the apple does not fall far from the tree. Fry can squat 640 pounds, which is second-best on the team behind his fellow linemate Dustin Fry (no relation). He has a 1,785-pound total weight lift, also among the best on the squad. He has a team-tying-best 410-pound lift in the hang clean, 410-pound bench press, 365-pound lift in the power clean, and 310-pound power clean push press as well.

Fry is statistically the second-strongest player on the team even though he is the lightest of the five interior linemen who started during Clemson’s 7-1 opening to the season. This is also the one aspect of Fry’s career that has remained continual and consistent. Regardless of where he is on the field, his workouts have remained steady, and as a result, his footwork and quickness are his best athletic attributes.

Upon his arrival at Clemson, he was red-shirted, along with Dustin Fry, giving the trio the opportunity to get stronger and learn from the sidelines.

Roman Fry came out strong and ready to contribute to the Tigers’ offensive line during the 2003 campaign. While battling for the starting spot all season, he played 300 total snaps, more than any other freshman on the Tiger team. That included 21 snaps in Clemson’s 2004 Peach Bowl appearance against #6 Tennessee, the highest-ranked team Clemson had beaten in a bowl game in 23 years.

This was only the start for this go-getter. The 2004 season proved to be even more impressive, as he played in all 11 games, including one as a starter. His 246 snaps again were tops among the reserve linemen. This was where his versatility really started to show. He started at right guard in the Florida State game and had 38 knockdown blocks, more than any other non-starter.

The solid sophomore season only motivated Fry to get even stronger, faster, and better all-around. The 2005 season was his best year, as he played in 11 games, starting seven, and won the team Hustle Award on offense. He was named Second-Team All-ACC at offensive guard, but he also saw action as Clemson’s backup center.

Fry was the only Tiger offensive lineman to earn First or Second-Team All-ACC honors in 2005. Though he did not earn his starting position until later in the season (at Wake Forest), he came out strong, leading the team in knockdown blocks in each of the last seven games of the season.

Fry was a huge contributor and a big reason Clemson won six of their last seven games in 2005. In the win over Colorado in the Champs Sports Bowl, he had 10 knockdowns and graded a team-best 88 percent in 55 snaps. He tallied five intimidation blocks, which were the most by a Tiger in a game all year.

In seven games of the 2005 season, he received grades in the 80s and 90s to tie for team-best in that area. Fry truly finished the year strong, as he went from not starting in September, to being an all-conference performer.

As a result of his intense focus and dedicated work ethic, the Football Writers Association of America named Fry to the 2006 preseason watch list for the Outland Trophy. He was one of 54 offensive and defensive linemen listed from around the nation. More impressively, he was one of just five ACC players on the list. He was first-team preseason All-ACC by Athlon, Lindy’s, Sporting News, Street & Smith, and USA Today. Lindy’s rated him as the eighth-best offensive guard in the nation, while Sporting News rated him #13.

None of this preseason hype went to Fry’s head, however. He received ACC Player-of-the-Week recognition for his September 16 performance against the #9 Seminoles. He totaled 13 knockdown blocks in just 53 snaps and graded out at 87 percent in the Tigers’ 27-20 victory in Tallahassee.

Fry’s biggest block came on Clemson’s winning touchdown play when James Davis ran behind his block to score the winning touchdown with only eight seconds left in the game. It was noted that he played a significant role, as Clemson had 151 yards rushing against the Seminole defense.

Largely due to Fry and his linemates, the Tigers have returned to their legacy of strong running and powerful offensive linemen. He spends most of his time with these guys. In their close camaraderie, they have learned to block together, play together, and live as a group.

The Frys (who are not related) even have a friendly competition in the weightroom. They keep each other motivated and on their toes. Consequently, they are the two strongest players on this competitive team.

Roman Fry started the first eight games this season before he suffered a torn ACL in the third play of Clemson’s victory over #13 Georgia Tech in Death Valley, abruptly ending his football career in a Tiger uniform. He suffered the injury while pass protecting. It was a sudden ending to what had been an outstanding senior year. SportsIllustrated.com had just named him a midseason first-team All-American, and he was also named the same by CollegeFootballNews.com. He had surgery to repair the torn ACL on November 1.

Fry completed his Clemson career with 18 starts and 43 career games played. He was leading the Tigers in knockdown blocks this year entering the Georgia Tech game with a total of 62. He, therefore, finished his career with 215 knockdown blocks over his four impressive seasons at Clemson.

“This is another big loss for our football team,” said Head Coach Tommy Bowden. “He will be difficult to replace on the field and in terms of senior leadership. When you look at our high national rankings in rushing, scoring, and total offense, Roman has had a lot to do with it.”

Though this is definitely not the way Fry expected to end his collegiate career, he still has a lot to fall back on. He is not only a well-rounded football player, he is a well-rounded, charismatic person. He has made the ACC Academic Honor Roll and will graduate in December with a degree in human resource development.

His two other favorite sports are bullriding and fishing. Unknown to most, he is also a very witty, laid-back guy.

“He’s an entertainer,” quarterback Will Proctor said. “He’ll do anything.”

Fry has ridden mechanical bulls, and has even sang karaoke songs by Hank Williams, Jr. and Alabama over the years. He is a guy that likes to have fun.

Football has been Fry’s passion since he was a young boy. He has loved it, embraced it, and has given it as much respect any player possibly could. He has had those same characteristics during his career at Clemson, and we are sure that attitude will continue in his pursuit of an NFL career.

Lindsey Meleski, a senior from Richmond, VA, is a student assistant in the Clemson Sports Information Office.