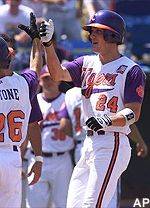 Houston – Clemson senior centerfielder Patrick Boyd has been named to the 2001 Rotary Smith Watch List, the Rotary Club of Houston announced Wednesday. The 14th annual Rotary Smith Award will be handed out in Houston on June 28.

The preliminary watch list was compiled after submissions by sports information personnel at all of the NCAA Division I baseball schools. Additional nominations may be added to the list until the first round of voting begins in May.

Boyd, a senior from Palm Harbor, FL, is a second-team preseason All-American by Baseball America and is ranked as the third-best senior in the nation by the publication. He is a career .341 hitter with a .442 on-base percentage and 49 stolen bases in three seasons. He ranks in the school’s top 10 in career doubles (seventh), career runs scored (ninth), career hits (ninth) and career RBIs (ninth). Boyd was a second team All-America selection in 1999 and was drafted in the fourth round by the Pittsburgh Pirates in last year’s amateur draft.

Now in its 14th year, the Rotary Smith Award is awarded each summer to the nation’s top college baseball player. Once again this year, the gala Award Dinner will be held at the Doubletree-Post Oak Hotel in Houston. The Award, a national project of the Rotary Club of Houston, raises money for Rotary national charities, Texas Children’s Hospital and the Karl Young League.

The Tigers are ranked in the top 10 by two polls, including a #5 ranking by Collegiate Baseball. Clemson opens the season Feb. 16-18 when it hosts Richmond in a three-game series at Doug Kingsmore Stadium.