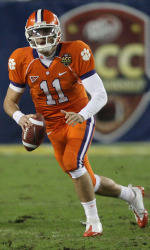 CLEMSON, SC – Kyle Parker, the only athlete in Division I college sports history to throw 20 touchdown passes on the gridiron and hit 20 home runs on the baseball diamond in the same academic year, announced Wednesday that he will return to Clemson to play football for the 2010 season.

“I am excited about this decision,” said Parker. “I am ready to get back to Clemson, work out with my football teammates and coaches and get ready for the season. The closer you get to football season the more you think about playing in Death Valley, running down the hill and being a part of the Clemson football tradition.

“I want to thank Coach Swinney for his patience in this process. I thought it was important to make a decision about football at this time to be fair to Coach (Dabo) Swinney and the team.

“I was in a situation where I couldn’t make a bad decision. All my options are still on the table at this point. The only option I have ruled out is playing baseball exclusively for the Colorado Rockies right now. Negotiations will continue with the Rockies, but I will play football at Clemson this fall.”

On the gridiron, Parker completed 205 of 369 passes for 2526 yards and 20 touchdowns in 2009. He established Clemson freshman records in all of those categories and the 20 touchdown passes rank fourth best in Clemson history. He had a streak of seven straight games with a touchdown pass, a school record.

Parker quarterbacked Clemson to nine wins last year, tied for first in the nation among freshmen and the most wins by a freshman quarterback in school history. He was named a second-team freshman All-American by collegefootballnews.com.

His top game on the gridiron last fall took place at Miami (FL) when he guided the Tigers to a 40-37 overtime victory over the eighth-ranked team in the nation. He completed 25-37 passes for 326 yards and three touchdowns, including the game winner in overtime to Jacoby Ford. Parker is the only freshman quarterback in school history to lead the program to victory against a top 10 team on the road.

Parker was a first-round draft choice of the Colorado Rockies in June, the 26th overall selection. He batted .344 this season with a team best 20 home runs and 64 RBIs. He was also fifth in the nation in runs scored with 85. He was named an All-American by various services, including a first-team selection by Ping!Baseball, second-team by Baseball America and NCBWA, and third team by the ABCA.

“We are very excited to have Kyle back. Whenever you have a returning starter at quarterback who led you to the Atlantic Division title, that is a real plus for your team. He is dynamic athlete who brings a lot of positives to our offense.

“When I talked with him late last night, he was excited to get back and get started.”

Season and single game tickets are still available for the 2010 season and can be purchased online at ClemsonTigers.com or by phone by calling 1-800-CLEMSON.