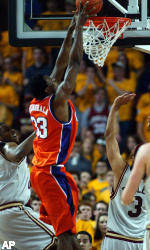 A pair of former Clemson basketball players were taken in Thursday night’s NBA Development League Draft. Akin Akingbala, a 2006 graduate, and Jamar McKnight, a senior in 2001-02, were both selected by the Los Angeles D-Fenders. A total of 120 players were taken over 10 rounds.

The D-Fenders, a franchise owned by the NBA’s Los Angeles Lakers, took Akingbala with the seventh selection (31st overall) of the third round. Akingbala averaged 12.1 points per game and a team-best 8.2 rebounds per game as a senior. He finished strong for the Tigers, as he posted double-doubles in eight of his final 11 collegiate games. Akingbala, who played in the NBA’s Vegas Summer League, ranks in the top 10 in school history in field goal percentage and blocked shots.

McKnight, who has played overseas recently, averaged 12.5 points per game as a starting forward in 2001-02 for Clemson. He also shot 74.5 percent from the free throw line over his two-year career as a Tiger.