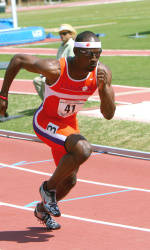 Clemson, SC – Former Clemson men’s track & field athletes Cowin Mills and Ato Stephens (formerly Modibo) were named to the 2008 Olympic team for Trinidad & Tobago. Mills, a senior on the 2008 team, will be making his first trip to the Olympic Games, which will be held in Beijing, China in August. Stephens will be making his second appearance in the Olympics.

Mills, who was born in Trinidad and lived there until he was nine years old, will be part of the country’s 4x400m relay team. He was a two-time ACC champion and 2007 NCAA All-American during his four years with the Tiger program. Mills helped the 4x100m relay team to a seventh-place national finish in 2007 and ACC championship in April. He also won a conference championship with the 4x400m relay in 2007.

Stephens lettered at Clemson from 1999-2002 and was a six-time NCAA All-American. Included in his honors were a pair of national championships in 1999. He won the indoor 400m dash and led the 4x400m relay team to its first-ever NCAA crown as well. Stephens was an eight-time ACC champion.

He was a member of Trinidad & Tobago’s team at the 2000 Olympics in Sydney, Australia and in 2004 in Athens, Greece. Stephens will be competing in the 400m dash and will be part of the 4x400m relay pool as well.