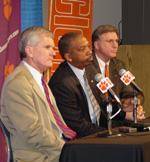 Head Coach Oliver Purnell “I can’t tell you how excited I am to be here. This is certainly one of the most important days of my life, minus marrying my wife and the birth of my kids. This is very significant and important to me. It seems like a long time coming.

“Many years ago when I graduated from college I was interviewed by Bill Foster for a graduate-assistant position at Clemson. At that time I also had an offer from my alma mater, Old Dominion, and I chose to do that. Often times I regretted that in terms of being more prominent and spending more years in the ACC. A few years (1998) back I interviewed for the head coaching job. For whatever reason it didn’t work out. Finally, today it does work out and I could not be any happier.”

“It has been a long-time goal of mine to coach in the ACC. Not only to coach in the ACC, but to be able win in the ACC. I really believe, and Terry Don (Phillips) has convinced me over the last few weeks, that he has the same belief and commitment. Our President (Dr. Jim Barker) certainly echoed that.

“There is a commitment here to be one of the Top-20 institutions in the country. A long with that comes a great athletic program. With this kind of basketball league it only makes sense to have a great basketball program. With that type of commitment, I feel like this is the place for me.

“I’m ready to get started. We are going to look at hiring a staff this week. We will hit the road recruiting on Wednesday. I’m looking forward to meeting the current players at 6:30 in the morning on Monday, so we can start to know each other, look forward and install the building blocks for our program. We are going to put them in a position where they can represent this great institution both on the court in terms of being competitive, but also off the court in terms of how they conduct themselves in the classroom, socially, and being great ambassadors for this institution. I really regard our program as being a positive PR tool for the institution.”

“I really appreciate Terry Don’s (Phillips) patience and willingness to work with me on my contract situation. Without getting into a lot of detail, I had a situation where I could not talk to other schools or I would have been penalized contractually. I wanted to be in a situation where Clemson could check me out and really understand who I was, where I was coming from and what my goals were, and then decide if they were truly interested. They were interested in me and I was certainly interested in them.”

“The ACC is one of the premier leagues in the country. I personally believe it is the best league in the country, year in and year out. If you are in the top echelon of the ACC, it puts you in the top echelon nationally. The bottom line is we want to win as many basketball games as we can, non-conference before we start the ACC season, move up the ladder and win as many games as we can in the ACC.

“A long term goal of mine, and if it happens, and I think that it will, is to win the ACC Tournament. You will see one happy man. Without question, it is the granddaddy of them all with the pageantry and tradition. Obviously, if you do some of those things you are going to have a high seed in the tournament like we did this year (at Dayton ). That gives you the best chance to advance, get to the Final Four and win the National Championship.”

“Everywhere I have been we have been in a situation where the program has been down. The three places where I have been I have learned a lot about how to build a program. The bottom line is people. Your coaches, your players and the people you surround yourself with are the most important. Obviously are coaching staff, as teachers are going to be the ones to invoke the message to the players. It is up to the players to internalize that message.”

President James F. Barker Opening Statement “Let me add my welcome to all of you here today for a very special development at Clemson in our quest to become a top-20 public university. We feel that we are taking a major step in that direction today.

“I want to first say how pleased I am at the work that Terry Don Phillips has done in the past few weeks in making the transition from one basketball program to the other, and for the terrific work that he has done to bring to us what we think is the right basketball coach for Clemson.

“As you know, we have a goal to become a top-20 public university and we believe that the best route to getting there is to embrace athletics and academics together as “One Clemson”. We think that “One Clemson” philosophy is powerful and we are seeing the early results of that now. We believe that with today’s announcement we are taking a clear step, not only to reaching the goals that we have set for the university, which includes a Final Four in basketball with full NCAA compliance, but we feel that we are taking a step in building “One Clemson”. That is why I am so pleased to be a part of this and so pleased that we have our new basketball coach here with us today.

On Purnell being Clemson’s first African-American head coach “This search was done the way that all searches are done at Clemson. We had a diverse pool of people and carefully looked at each of their backgrounds, looked at the situation, then chose the best person. That is exactly what we have done in this decision. Our goal is to increase our diversity and increase our sense of community. One or the other of those is not hard to do by itself, but putting them together is the challenge. In getting to know Oliver, I think we have someone who can do both of those things – increase our diversity and increase our sense of community. I think that is what the Clemson family would like to see and we are very pleased that Oliver will be a part of that.

Athletic Director Terry Don Phillips Opening Statement “When I had the opportunity to visit with Dayton’s athletic director he said that he was very happy for Oliver at this step in his career and that he is very deserving. He went to Dayton when the program was down and he built it into one of the nation’s better programs, one in which his kids graduated and he did things the right way.

On believing that Clemson basketball can be successful: By virtue of the fact that we are in a great conference, we have got to develop consistency at a certain level and that consistency will allow us to grow and allow us to be a factor in the championship race.

The approach to success in a program is a partnership with a coach. The coach has to have support and we have to put them in a position so that they can put their kids in a position to be successful. We owe it, not only to our basketball student-athletes, but to all of our student-athletes to do those things so that they can be successful. It is a partnership between what we do administratively in the athletic department and the university and the coach. If they’re successful, we are all successful.

Senior Chris Hobbs “I really didn’t know much about him. I got a little background information on him last night, but his record speaks for itself. The things I’ve heard about him don’t do him justice. I can’t wait to work for him.”

“He’s a good choice from what I’ve heard so far. He seems to be a great coach and a great guy.”

“We got past through the break [without a coach] by putting our trust in Terry Don Phillips and President Barker. Now, the team will be united behind Coach Purnell.”