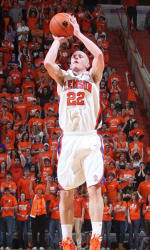 Clemson, SC – Terrence Oglesby, a starting guard on Clemson’s 2008-09 NCAA Tournament team, has announced he will forego his final two seasons at the school to pursue a professional basketball career. Oglesby appeared in 66 games and scored 777 points in his two seasons with the program.

“Over the past several years, I have had the opportunity to play internationally, and as a result I have been given the opportunity of playing professionally in Europe,” Oglesby said. “After much thought and consideration, I have opted to take my basketball career a step further and pursue a professional career.

“I have enjoyed my time at Clemson University and want to thank all the fans and friends for being supportive. My decision is based solely on chasing the dream of being a professional basketball player. I would like to thank all my coaches and teammates for a memorable two years, and wish them the best of luck in the future.”

Oglesby received honorable mention for the ACC’s All-Freshman Team in 2007-08 after averaging 10.5 points per game as a reserve. Despite never starting a game, he led the team with 85 three-pointers that season, which included his memorable game-winning long ball to cap a 20-point come-from-behind win at Maryland.

“Terrence has informed me of his decision to seek a professional career in Europe,” said Oliver Purnell, Clemson’s head coach. “Although I am disappointed Terrence will not be with us next season, I wish him all the best in this endeavor. I appreciate all of his efforts and contributions on two NCAA Tournament teams.”