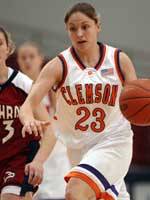 Clemson was led by senior reserve guard Tabitha Vasilas, who scored 13 points in just 15 minutes of play. She was the only Lady Tiger to make a three-point goal during the game. All-ACC guard Chrissy Floyd scored 11, but did not score over the last 17:38 of the contest.

Clemson was hurt by poor shooting throughout the game. The Lady Tigers started 2-16 from the field and shot just 19-58 for the game, .328. North Carolina made eight of its first 12 shots from the field. The Lady Tigers made just 2-9 three-point shots for he entire game. North Carolina shot 55.6 percent in the first half and 50 percent from the game. They made 6-12 three point shots.

Clemson also committed 24 turnovers in the game. North Carolina had 13 steals as a team compared to just four by Clemson’s defense.Behind 6-6 Sutton’s play inside, North Carolina outscored Clemson in the paint 36-12 and won the points off turnovers stat 35-13.

Clemson’s defense did hold North Carolina’s leading scorer, Coretta Brown to just three points in 34 minutes. The senior guard came into the game averaging 13.5 points a game and was coming off a 28-point performance against Florida State.

North Carolina took an early 13-3 lead in the game’s first six minutes. Metcalf scored five of those points in the early run. Clemson cut the advantage to five points at 16-11 on a free throw by Maggie Slosser at the 10:49 mark. The Tar Heels went on a 9-3 run late in the half to take a 31-20 lead on a jumper by Jennifer Thomas.

North Carolina held that 11-point cushion at halftime, 35-24. Clemson shot just 8-31 in the first half, while the Tar Heels hit 15-27. Metcalf had 10 points to lead North Carolina, while Floyd scored seven for the Lady Tigers.

Clemson made a terrific run at the outset of the second half. Starting three players at the beginning of the second half who did not start the game, Clemson went on a 15-3 run to open the half and took a 39-38 lead at the 14:21 mark. Floyd made a pair of jumpers during the run and Vasilas’s jumper finally gave Clemson a lead. The two teams traded baskets for the next minute. Another Vasilas jumper brought Clemson to a 41-40 lead at the 13:32 mark, but that would be Clemson’s last lead of the game.

North Carolina went on a 19-2 run over the next 6:45 to take a 59-43 advantage at the 6:47 mark of the game. Sutton scored eight of the points (three field goals and two free throws) during the run as she continually got open on the inside of Clemson’s defense. Clemson never got the lead under 16 points the remainder of the game. North Carolina’s 22-point margin at the buzzer was its largest lead of the night.

Clemson will next be in action on Sunday at NC State. The Tar Heels will meet top ranked Duke Sunday in Chapel Hill.