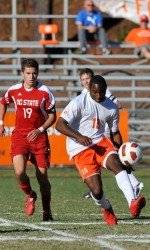 The Tigers came out firing in the early going drawing a corner kick just a minute and a half into the contest. Clemson’s reigning ACC Player of the Week, K.C. Onyeador, was on the attack less than a minute and a half later. Onyeador had a chance in the box that went to Scott Goodwin for the save.

North Carolina would make another run in the 21st minute as Matt Rose found the ball at his feet on the left side of the field.

Rose darted past a defender and found himself in the box before Clemson’s goalkeeper Cody Mizell made contact with Rose resulting in a yellow card and awarding the Tar Heels a penalty.

Senior Michael Farfan, stepped to the penalty spot and delivered a drive into the right side of the net to give North Carolina the 1-0 lead. The goal was Farfan’s fourth of the year.

At the 55:53 mark, Alex Dixon looked to put the Tar Heels up by two goals when he unleashed a shot from 35 yards that hit the crossbar. The ball ricocheted straight down and spun out of the goal keeping the score 1-0.

Dixon’s strike came just minutes after Scott Goodwin made a save on Clemson’s Austin Savage’s shot. The Clemson forward found a hole in the defense and was less than 15 yards out when he received the ball. Savage rifled a shot but Goodwin was charging from the net and slid to block the shot.

The Tar Heels garnered a corner at the 72:46 mark that Kirk Urso fed into the box. Jordan Gafa rose to head the ball but a Clemson defender was able to deflect the ball to the top of the box.

Dustin McCarty was waiting for the clearance and fired a shot back into the box. Freshman Robbie Lovejoy was in position as he back heeled the ball in the goal to give North Carolina the 2-0 advantage in the 74th minute. The goal was Lovejoy’s third of the season.

Clemson will play in the ACC Tournament in Cary, NC next week.