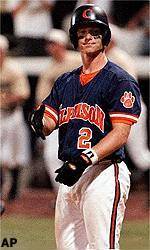 CLEMSON, S.C. – UNLV plated two runs in the eighth inning on a Mike Proto throwing error, as the Rebels downed #8 Clemson 4-3 Sunday afternoon. UNLV avoided the series sweep with the win. The loss for the Tigers broke their nine-game winning streak.

UNLV (6-15) got on the board first, scoring one run in both the second and third innings. In the second, UNLV’s Adam Manley drew a walk from Clemson starter Jarrod Schmidt. Manley then advanced to second and third on sacrifice bunts by Harold Betts and Brad Maloff, and scored on a single by Zach Strong. Rebel left fielder Denny Seybert led off the third inning with a single, reached third on a Clemson throwing error, and scored on an RBI groundout by Tony DeMarco.

The Tigers (11-2) rallied in the bottom of the seventh, scoring three runs to take a 3-2 lead. Designated hitter Bradley LeCroy led off the inning with a single. Ryan Hub followed with a single up the middle on an 0-2 pitch. Catcher Steve Pyzik then fouled off the first two pitches on failed sacrifice bunt attempts, bringing the count to 0-2, before being hit by a pitch by Rebel starter Giovanni Pupo. That set up a bases-loaded trip to the plate for Tiger left-fielder Casey Stone, who hit a single to center, scoring LeCroy and Hub. Later in the inning, third baseman Khalil Greene singled, scoring Stone, breaking a 1-for-15 slump.

UNLV came back with two runs in the eighth. Manley and Harold Betts both walked with two outs. Pinch-hitter Brad Beasley then hit a swinging bunt to pitcher Mike Proto, who threw the ball away, allowing Manley and Betts to score, as Betts scored all the way from first base.

Clemson designated hitter Bradley LeCroy had two hits to lead the Tigers. Casey Stone added a single and two RBIs for Clemson. Stone set a Clemson career record for sacrifice bunts in the game with his 16th in just over two seasons.

UNLV left-fielder Denny Seybert had a single and a double to lead the Rebels. Strong and DeMarco had one RBI each.

Senior righthander Matt Additon (2-1) took the loss for the Tigers. Freshman right-hander Jarrod Schmidt started for Clemson, and allowed just one earned run and three hits in 7.0 innings. Tiger pitchers yielded just four hits, including just one after the fifth inning, and one earned run.

Righthander Andy McCulloch (1-1) earned the win for the Rebels in relief, pitching 2.1 hitless and scoreless innings. Freshman left-hander Pupo got the start for UNLV, and pitched effectively until Clemson’s three-run seventh inning.

Clemson will next play host to William & Mary Wednesday at 3:00 PM.