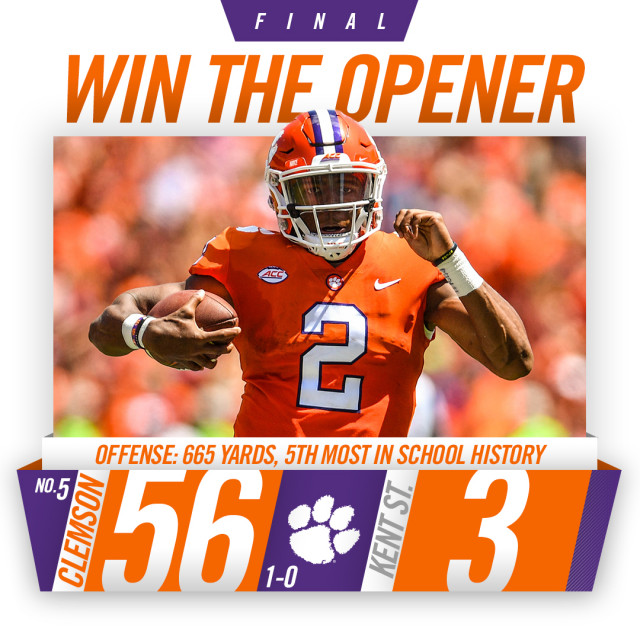 CLEMSON, S.C. – The No. 5 Clemson Tigers opened the 2017 season with a win on Saturday in Death Valley, defeating the Kent State Golden Flashes 56-3 in the teams’ first meeting. The 56 points were the most the Tigers scored in a season opener since 1990. With the win, the Tigers moved to 1-0 on the season, while the Golden Flashes fell to 0-1.

Clemson got on the board less than two minutes into the game on a 26-yard run by C.J. Fuller, and Bryant threw his first touchdown pass of 2017 just three minutes later, a 61-yard dagger to Deon Cain. The third and final score of the first quarter came on a three-yard touchdown run from Adam Choice.

Kent State’s lone score came on a Shane Hynes 37-yard field goal early in the second quarter. Bryant’s first rushing touchdown of 2017, an eight-yard run, came later in the same quarter and gave the Tigers a 28-3 lead that they took into halftime.

The Tigers’ final score of the day was Etienne’s first career touchdown, a four-yard rush that came four minutes into the fourth quarter.

Clemson returns to action next Saturday when they host Auburn at 7 p.m. at Death Valley.