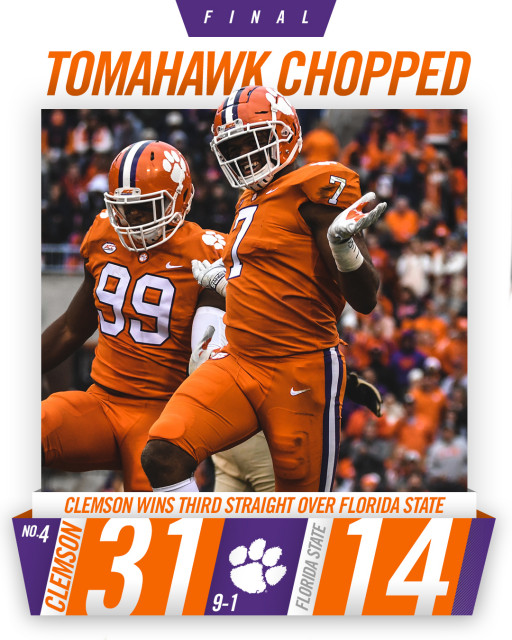 CLEMSON, S.C. – The No. 4 Clemson football team clinched a spot in the 2017 ACC Championship Game by defeating Florida State 31-14 on Saturday afternoon in Death Valley. With the win, Clemson improved to 9-1 overall and 7-1 in the ACC, while Florida State dropped to 3-6 overall and 3-5 in conference play.

Offensively, the ground game powered the Tigers, as all four of Clemson’s touchdowns were via a run, one each from Kelly Bryant and Adam Choice and two by Travis Etienne. Bryant finished the game with 60 yards on 19 carries, and Etienne ended with 97 yards on 14 carries. On the defensive side of the ball, Van Smith led the way with an interception on what could have been the Seminoles’ go-ahead drive. Smith also had five tackles, and J.D. Davis and Christian Wilkins topped the Tigers with seven tackles apiece.

Clemson scored the only points of the first quarter with just under three minutes left in it when Bryant pushed two yards for his 10th rushing touchdown of the season.

Etienne found the endzone with six and a half minutes left in the second quarter, breaking through traffic and powering 28 yards to cap off a one-play drive, set up by a Ray-Ray McCloud 35-yard punt return. The Tigers finished the first half with a 26-yard Alex Spence field goal and took a 17-0 lead into halftime after limiting Florida State to just 46 yards in the first 30 minutes.

The Seminoles tallied their first points with just over a minute left in the third quarter when Jacques Patrick rushed three yards for a score that cut the Tigers’ lead to 17-7. Florida State then cut Clemson’s lead to just three points midway through the fourth quarter when James Blackman connected with Ryan Izzo for a 60-yard touchdown pass.

On the ensuing Clemson drive, the Seminoles forced and recovered a fumble, but Smith’s interception regained Clemson possession just one play later and paved the way for another Etienne rushing touchdown that put the Tigers up 24-14 with three minutes remaining in the game. Choice scored the Tigers’ final points of the matchup on a 10-yard touchdown run that ended a drive in which he amassed 28 of his 40 rushing yards on three carries.

Clemson will play its last home game of the season and Military Appreciation Day game next Saturday against The Citadel. Kickoff is slated for 12:20 p.m.