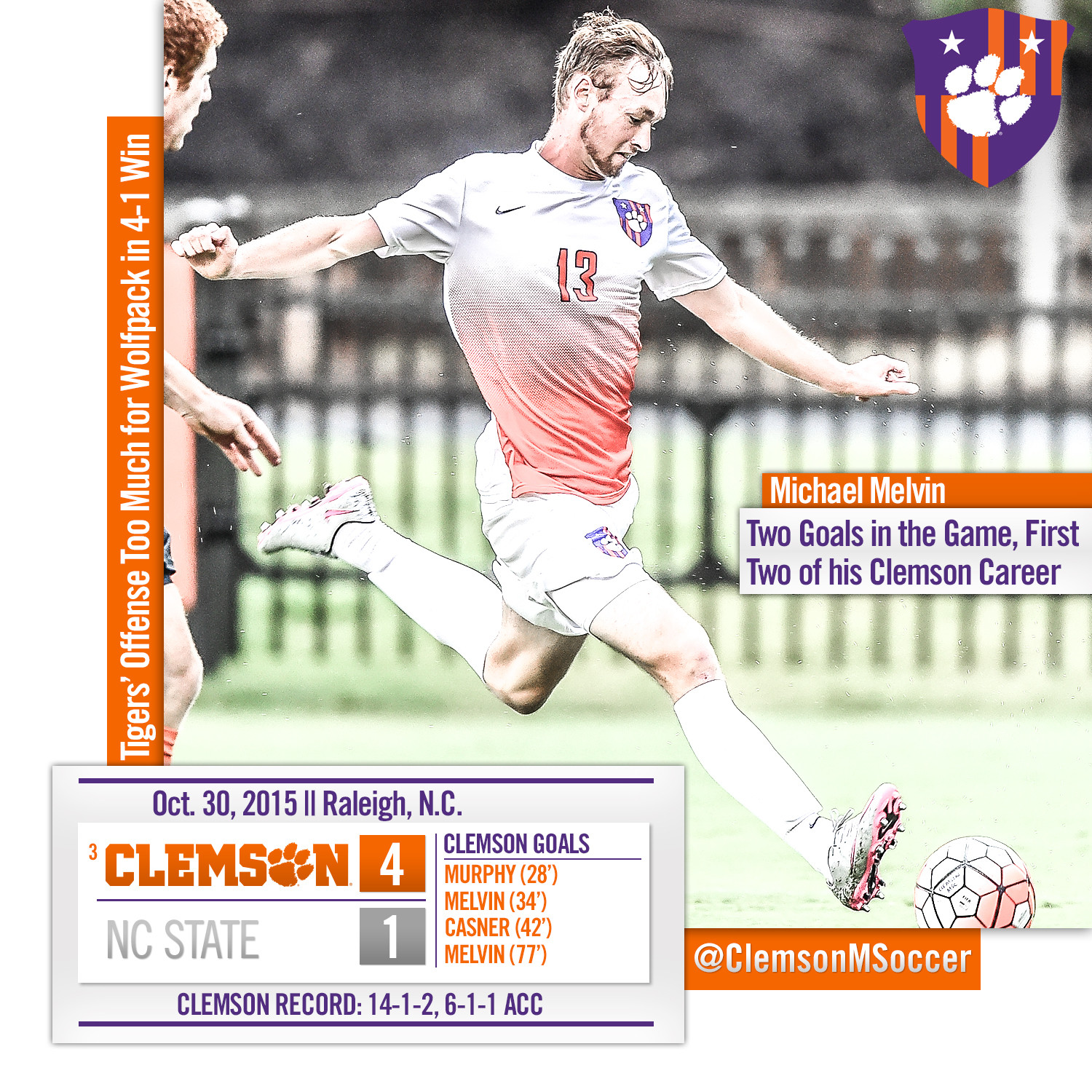 No. 3 Clemson?s Offense Too Much for NC State in 4-1 Road Victory

RALEIGH, N.C. – Sophomore Michael Melvin scored the first two goals of his Clemson career on Friday night, helping the Clemson men’s soccer team to a 4-1 road victory against NC State at Dail Soccer Stadium. With the win, the third-ranked Tigers concluded the regular season at 14-1-2 overall and 6-1-1 in ACC play, while the Wolfpack fell to 8-5-3 (1-4-3 ACC) with the loss.

“I’m very proud of this team, and all the credit goes to the players,” said Head Coach Mike Noonan. “They’ve shown how much they’ve grown this season in terms of mental toughness, in being able to come to NC State and win on the road. All season, our players have been committed to achieving something special, and have continued to pursue excellence. We’re ready for ACC and NCAA Tournament play.”

Redshirt senior Kyle Murphy gave the Tigers a 1-0 lead in the 28th minute when he received a cross from the left side from sophomore Oliver Shannon. Murphy’s close-range shot hit the crossbar and bounced into the net for his sixth goal of the season.

Six minutes later, sophomore Michael Melvin netted his first goal of the season, and of his Clemson career, at the 33:17 mark. Senior T.J. Casner crossed the ball in from the right side and Murphy put a foot on the ball, sending it to Melvin, who scored from 16 yards. Casner scored his eighth goal of the season on a penalty kick in the 42nd minute to provide the Tigers with a 3-0 lead heading into halftime. Murphy was making a run when he was taken down in the box, which resulted in the PK.

Melvin scored his second goal of the game in the 60th minute on a shot that was launched into the upper right corner of the net past the diving Wolfpack keeper. Casner picked up his second assist of the game on the play. NC State’s Phillip Carmon put a goal on the board at 76:05 to provide the final margin of 4-1.

Tarbell tallied five more saves in the win, bringing his season total to 58. The Wolfpack had the advantage in shots, 16-9, and corner kicks, 7-4, but the Tigers were efficient, scoring on four of their nine shots in the contest.

Clemson has already locked up one of the top four seeds in the ACC Tournament, which ensures the Tigers will host a quarterfinal-round match on Sunday, Nov. 8 at 1 p.m. at Historic Riggs Field. The Tigers’ exact seed, and their potential opponents for the match, will be determined on Saturday afternoon after the conclusion of ACC regular season play for all teams in the conference.