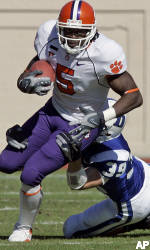 DURHAM, N.C. (AP) – Tommy Bowden worried all week that Clemson was in for yet another uninspired visit to Duke. For a while, he was right – until the offense finally gave the Tigers some breathing room.

Almost immediately after that, the defense and the special teams also got into the scoring act.

Cullen Harper’s short scoring run set off a momentum-shifting burst of 16 points in 39 seconds that carried No. 25 Clemson to a 47-10 rout of the Blue Devils on Saturday.

“We’re doing what we didn’t do last season: we’re playing strong at the end of the season,” Davis said. “That’s kind of what everybody wanted to see.”

The Tigers (7-2, 4-2) won their third straight, shrugging off a slow start with a 23-point second quarter that all but guaranteed they wouldn’t leave Wallace Wade Stadium with another loss. Their previous visit to Durham in November 2004 ended with Duke pulling a last-second upset, and the Blue Devils (1-8, 0-6) haven’t won an ACC game since, dropping their 23rd in a row.

“This place will lull you to sleep a little bit, and history indicates that,” Bowden said. “We made them real aware of the history up here, and how tough it is to play.”

Harper completed 17 of 26 passes for 184 yards and Davis had 118 yards on eight carries for Clemson, which led 10-7 before breaking the game open late in the first half, scoring three times in less than a minute.

Harper’s 42-yard pass to a diving Tyler Grisham at the 3 set up the quarterback’s first career touchdown run came. He rolled right and paused to look for a receiver before plowing into the end zone at the 1:10 mark.

“I could have run it in really easily and quickly, but I guess that’s just my mentality – look, look, look for the pass,” Harper said.

Spiller then pushed the lead to 26-7 by returning the ensuing free kick 84 yards for a touchdown, the running back’s school-record eighth career touchdown covering 50 or more yards. He fielded the kick near the right hash marks at the 16, cut to the right side, escaped two tackles and dashed down the sideline to make it 26-7 with 31 seconds until the break and deflate the Duke sideline.

“We just had a breakdown that we can’t have against a talented ball club like that,” Duke defensive lineman Vince Oghobaase said. “It cost us in all three phases.”

Earlier in the quarter, Harper put Clemson ahead to stay when his 19-yard scoring pass to Kelly midway through the second quarter gave the Tigers a three-point lead. The pair hooked up again late in the third quarter for a 5-yard touchdown that stretched the lead to 40-7.

“I believe he’s been reading about them records, because he could have run some in, but he threw them,” Bowden said, laughing.

Lewis completed 15 of 26 passes for 160 yards with one touchdown and one interception against the nation’s third-best defense against the pass for the Blue Devils, who lost their sixth straight and have a 36-game losing streak against ranked teams since upsetting then-No. 13 Virginia in 1994.

Duke has allowed five of its nine opponents to score at least 40 points.

“Sometimes we were in position to make a play and couldn’t finish it off,” Duke coach Ted Roof said. “In this game, sometimes you have to give credit to really good players.”