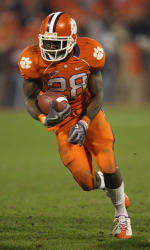 RALEIGH, N.C. (AP) – C.J. Spiller actually did pretty much do it all for Clemson.

He ran for a touchdown, caught a scoring pass and threw one of his own to help the 24th-ranked Tigers beat North Carolina State 43-23 on Saturday, putting them in position to go to the ACC title game.

“I’m just proud of C.J. – another ho-hum day for him,” Clemson coach Dabo Swinney said. “I don’t know how many other ‘first evers’ the guy can have.”

No one else at Clemson ever had a touchdown pass, catch and run all in the same game.

The do-everything back rushed for 97 yards on 18 carries and made three catches for 48 yards, including a 34-yarder that blew open the game early in the fourth quarter.

The Tigers will clinch the ACC Atlantic Division if Boston College loses at Virginia later Saturday. If not, they’ll have to beat the Cavaliers the following week.

N.C. State squibbed its first three kickoffs in an effort to keep the ball away from Spiller and fellow speedster Jacoby Ford, setting up the Tigers with good field position. Punter Jeff Ruiz aimed his kicks toward the sideline for the same reason, but he shanked one for 6 yards that gave the Tigers the ball at the N.C. State 17 early in the second quarter.

On the next play, Spiller threw the second touchdown pass of his career to give the Tigers a 17-0 lead.

He took a toss to the right and lofted the ball to Xavier Dye, who was open in the end zone after running behind cornerback C.J. Wilson.

“I got a lot of grief on the sideline because it was a duck,” he said. “But it got us six points.”

It was about the only flaw in his game Saturday. Oh, he also didn’t have a play of over 50 yards for the first time in nine games against Football Bowl Subdivision teams this season.

“They talked him up a lot – I thought maybe too much – coming into the game,” N.C. State defensive end Audi Augustin said. “But he proved it.”

N.C. State was eliminated from bowl consideration. The Wolfpack had been 7-2 in November games under Tom O’Brien, including a 4-0 mark last season that earned them a bowl berth.

Kyle Parker was 12 of 18 for 183 yards and two touchdowns as Clemson scored at least 38 points for a school-record fifth consecutive game.

“I don’t understand that at all,” O’Brien said. “You come out and have a chance to play, and you have to make plays. Too many mistakes to be against somebody as good as Clemson is. We’ve got chances, got guys open. They’ve got to catch it.”

N.C. State’s fans, most of whom weren’t around at the end of the game, voiced their displeasure during the second quarter. After watching wide receivers drop three throws, they delivered a loud, sarcastic cheer when Koyal George managed to hang onto one of Wilson’s passes.

George made an 18-yard touchdown reception to end that drive, bringing the Wolfpack within 10 points at 17-7, but they never got closer.

The Tigers, meanwhile, moved one step closer to their goal of winning the ACC and playing in a BCS bowl.

“We’re where we wanted to be,” Spiller said. “We control our own destiny.”