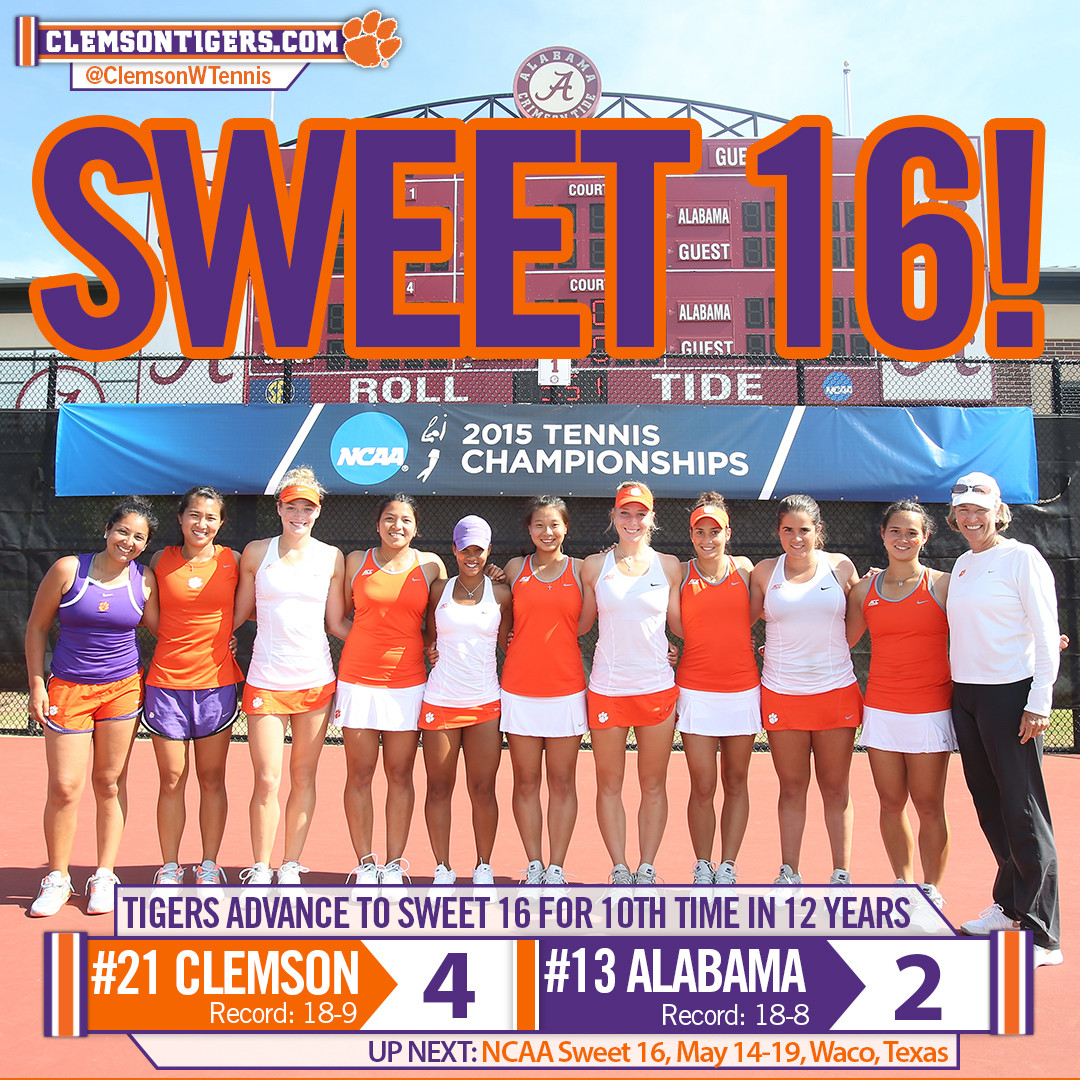 TUSCALOOSA, Ala. – For the 10th time in the last 12 seasons, the 21st-ranked Clemson women’s tennis team secured a spot in the NCAA Sweet 16, following a 4-2 upset over No. 13 Alabama in the NCAA Second Round on Saturday afternoon in Tuscaloosa. With the win, the Tigers improved to 18-9 overall, while the Crimson Tide finished the season at 18-8, and earn a spot in the NCAA Team Championships in Waco, Texas from May 14-19.

Not only is the NCAA Sweet 16 appearance the 10th for the Tigers in 12 seasons, it is also the team’s 10th appearance in the team championships under Head Coach Nancy Harris, who is in her 18th season at Clemson. Today’s win was also a win for Harris over her alma mater, as she graduated from Alabama and also played two seasons of collegiate tennis for the Crimson Tide. The Tigers are now 11-1 all-time in the series against Alabama, including a 4-0 mark in matches played in Tuscaloosa.

Clemson’s top doubles team of seniors Beatrice Gumulya and Jessy Rompies, ranked fourth in the nation, started out the match with an impressive 8-2 win over the nation’s number-one doubles team of Maya Jansen and Erin Routliffe. This is the second time this year that the Tiger duo has defeated the Crimson Tide pair, as they were also victorious in the quarterfinals of the ITA All-American during the fall of 2014, a tournament that Gumulya & Rompies went on to win.

Play could not have been closer at No. 2 and 3 doubles, with tiebreaks forced on both courts. Junior Joana Eidukonyte and freshman Daniela Ruiz trailed 2-6 in their seven-point, win-by-two tiebreak, when they began their comeback at No. 3. The duo reeled off four-straight points to tie it at 6-6, and then the two teams traded points until Eidukonyte and Ruiz pulled ahead for an 11-9 victory to clinch the doubles point. At No. 2 doubles, seniors Romy Koelzer and Yuilynn Miao were leading 7-6 in their tiebreak against No. 57 Perez and Spielmann when play was abandoned.

The Crimson Tide rebounded in singles play, as Emily Zabor and No. 34 Routliffe defeated junior Tristen Dewar and No. 36 Koelzer at No. 5 and No. 1, respectively, to take a 2-1 lead in the match. Eidukonyte, ranked 12th in the nation, won her first set 6-1 against #67 Jansen, and then battled for a 7-5 second-set win to tie the match at 2-2.

Clemson won first sets on Courts 2, 4 and 6, but Alabama fought back to win all three second sets and force third sets on each court. Rompies came out strong for her third set, winning 6-1 over her Tide opponent to give the Tigers a 3-1 lead. Gumulya, ranked 60th nationally, followed with a 6-2 third-set victory over 72nd-ranked Spielmann to clinch Clemson’s 4-2 win and NCAA Sweet 16 berth. Senior Yuilynn Miao, playing at No. 6 singles, played with incredible heart, and was tied 3-3 in her third set when her match was halted.

[View the story “Clemson vs. Alabama, NCAA Second Round” on Storify]