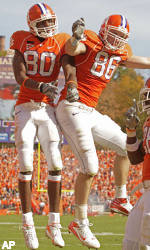 No. 20 Clemson Rolls Past Wake Forest

CLEMSON, S.C. (AP) – It only took Clemson quarterback Cullen Harper a few moments to move past Saturday’s big win and hone in on a game even bigger.

Harper threw for three touchdowns and ran for a fourth in the 20th-ranked Tigers’ 44-10 victory over Wake Forest. More importantly, Harper’s play helped Clemson (8-2, 5-2) set up a Death Valley showdown with Boston College next week for a spot in the Atlantic Coast Conference title game.

“It’s the biggest game we played in here in a while,” Harper said. “It’s all on the line next week.”

Much of that is due to Harper’s record-setting season – one that could travel through Jacksonville, Fla., site of the league championship next month.

“We just got to stay focused and take care of business and not self-destruct,” Harper said.

That could be difficult.

Clemson won six ACC titles from 1981-91, but none since. As orange-clad fans rushed the field after the game, the public address announcer reminded them that “next Saturday night is going to be huge.”

The stadium’s scoreboard flashed “C-U next week for the divisional championship.”

“We have everything in front of us,” Clemson linebacker Cortney Vincent said. “The key is to prepare like we did this week.”

For Wake Forest (6-4, 4-3), its second consecutive loss means a likely end for defending the ACC crown it won a year ago. The Demon Deacons opened their season with a loss to Boston College.

“It’s not something we want to think about right now,” Wake Forest quarterback Riley Skinner said. “We’ve been proud to win the ACC and we want to do it again.”

That goal collapsed this year when Clemson gave much of the 81,500 at Memorial Stadium a reminder of how it used to handle the Demon Deacons.

This time, Harper and the Tigers didn’t give Wake Forest the chance to cause trouble. Clemson scored on its first four possession to lead 24-7 midway through the second quarter.

Harper, who came in with a school-record 23 touchdown throws, scored on a 7-yard keeper to finish Clemson’s first possession. Mark Buchholz kicked the first of his three field goals to make it 10-0.

After Wake Forest got its only touchdown on Josh Adams’ 2-yard run, Harper connected with Tyler Grisham on a 5-yard touchdown and Aaron Kelly for a 10-yard TD.

The Tigers wouldn’t sit on the lead, either. When it got the ball on its 20 with 1:18 left in the half, Harper drove Clemson into field goal range and Buchholz hit a career-long 52-yarder for a 27-7 lead at the half.

Clemson’s defense did its share, too. Skinner was sacked three times in the first half. Wake Forest, fourth in ACC rushing at nearly 150 yards a game, managed just 83 yards on the ground.

The Tigers even got a little help out of its special teams. When Demon Deacons kicker Sam Swank nailed a 52-yarder of his own to cut the lead to 27-10, C.J. Spiller followed with a 90-yard kickoff return TD.

It was the sophomore’s ninth touchdown play of 50 or more yards, adding to the school record he set last season.

Harper completed 27 of 35 passes for 266 yards, and his 9-yard touchdown throw to Kelly finished the scoring.

Harper “has the ability to wear you out,” Wake Forest’s Grobe said. “He did that to us today.”