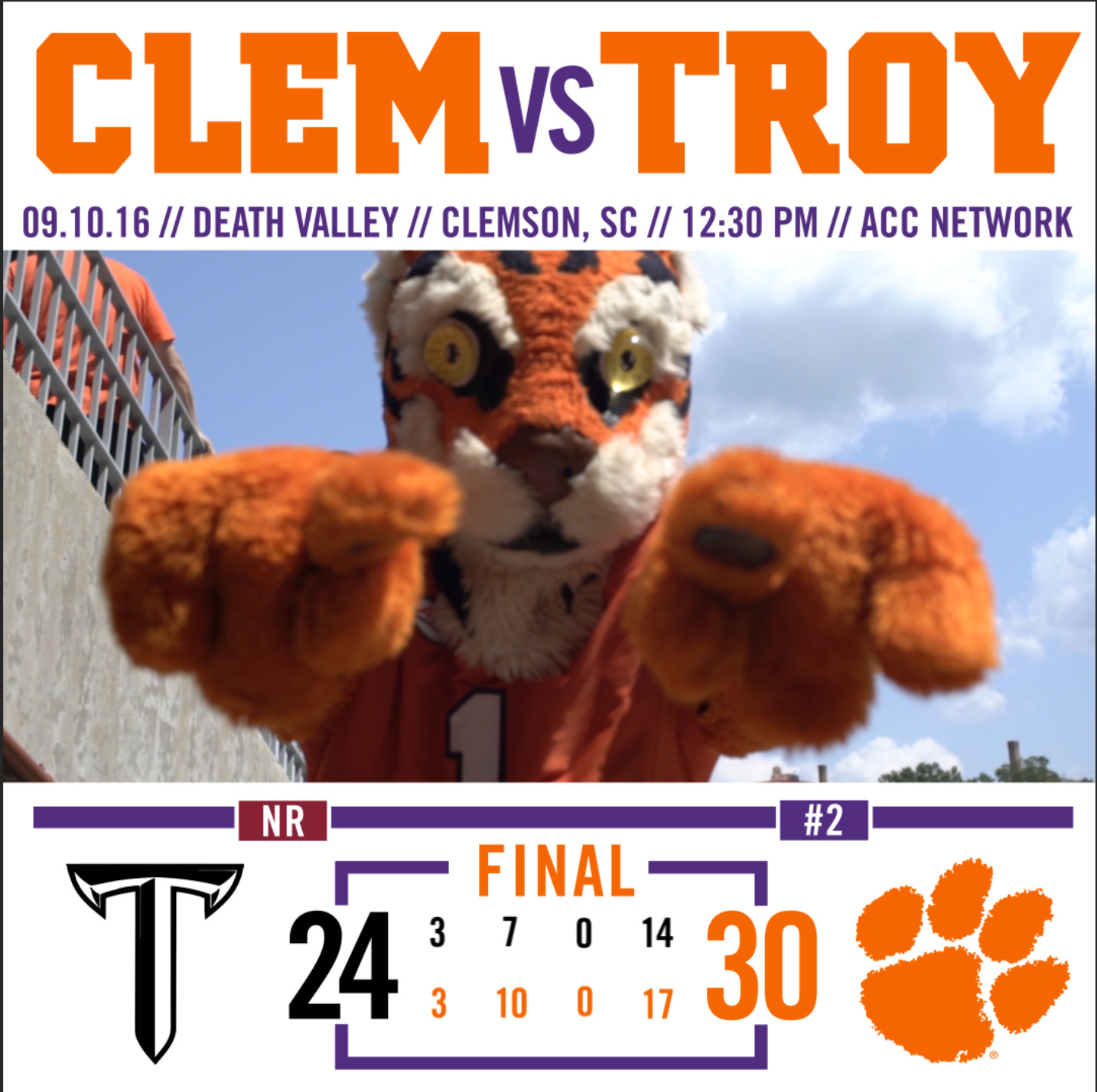 The Tigers (2-0) were led by quarterback Deshaun Watson, who was 27-53 passing for 292 yards and three touchdowns, as he moved ahead of Woodrow Dantzler for third place on Clemson’s all-time passing yards list.

The first quarter featured little scoring, as both teams struggled to develop any type of offensive rhythm. Favorable field position following a punt allowed the Trojans (1-1) to convert a short drive into the game’s first score, a 39-yard field goal by Ryan Kay. On the ensuing possession, the Tigers reciprocated with a 26-yard field goal by Greg Huegel.

The second quarter was a far different story. Watson took advantage of a Troy turnover by throwing a 35-yard touchdown pass to Hunter Renfrow, marking the sophomore’s fourth straight game with a touchdown reception.

Interceptions played a key role in the second quarter, with Troy quarterback Brandon Silvers throwing three to Clemson linebackers. Interestingly enough, these were the first career interceptions for all three (Jalen Williams, Kendall Joseph, Dorian O’Daniel). Williams’ interception, which was the byproduct of a tipped pass at the line, bailed out the Tigers, who had just turned the ball over in their own territory.

Despite several electrifying offensive and defensive plays, including a 66-yard touchdown run by Troy running back Jabir Frye that tied the score 10-10. Late in the quarter, Clemson’s Ray-Ray McCloud dropped a sure punt return for a touchdown on the one yard line, and after a lengthy video review, Troy took over on a touchback.

After Kay missed a 48-yard field-goal attempt in the final seconds, the Tigers took a 13-10 advantage into halftime.

McCloud, who had seven catches for 86 yards in the game, had three receptions on a key third-quarter drive en route to a goal-line situation. Defensive lineman Christian Wilkins then made the second-most important reception of his college career later in the drive in the fourth quarter, a one-yard touchdown grab, the first of his career, that gave the Tigers a 20-10 lead.

Clemson scored to take a 27-10 lead with 10 minutes remaining in the game when Watson found Deon Cain in the endzone for a 23-yard touchdown. After a Huegel field goal with 2:25 remaining, Troy drove 68 yards and scored to cut the deficit to 30-24, as Silvers connected with Deondre Douglas for a one-yard touchdown pass with 44 seconds remaining. The Tigers recovered the ensuing onside kick and held on for the 30-24 victory.

The Tigers host SC State next Saturday at noon in their next action.