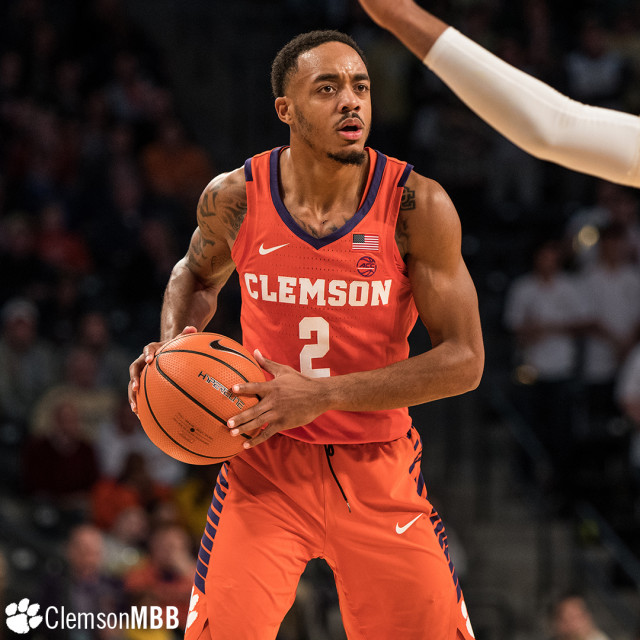 ATLANTA — A Marcquise Reed layup with 25 seconds remaining proved to be the difference in a hard-fought two-point victory on the road for Clemson University men’s basketball on Sunday night at Georgia Tech in front of a sellout crowd in McCamish Pavilion.

Gabe DeVoe netted a career-high 25 points on 10-for-15 shooting from the field, including 5-for-8 from distance. Shelton Mitchell also had a huge game, scoring 17 points.

Reed posted a double-double with 13 points and a career-high 11 assists. The number of assists is the most by a Clemson player under Brad Brownell. Three previous to Reed all notched 10 assists each.

The Tigers (17-4, 6-3 ACC) found themselves down by a game-high 12 points in the opening half and slowly clawed their way back and gained its first lead of the game on an Elijah Thomas three-point play at 41-38 with 17:48 left in the second half. The Tigers went on a 13-2 run to end the first half and begin the second half.

Reed’s layup on the next possession added in with a defensive stop sealed the victory for the Tigers.

Clemson will turn around quickly to host North Carolina on Tuesday night at 7 p.m. in Littlejohn Coliseum. The game will be broadcast nationally on ESPN.

Notes: The win improves Clemson to a 6-3 mark in ACC play … it’s the ninth time in program history (64 ACC seasons) the Tigers have started a conference season at least 6-3 … since the ACC moved to an 18-game schedule in 2012-13, the Tigers have now matched their best start through nine games when playing at least five road games … it’s the first time since 1986-87 that Clemson is 21 games into a season without losing consecutive games … Clemson is now 5-1 in games decided by five points or less or in OT … that leads the ACC in wins by five or less … Gabe DeVoe notched career-highs in points (25), field goals made (10) and matched his high in threes made (5) … Marcquise Reed set a new career-high with 11 assists (the most for a player under head coach Brad Brownell at Clemson) … Reed’s double-double is the second of the season and his career (also had 16 points and 11 rebounds vs. Hofstra on Nov. 17).