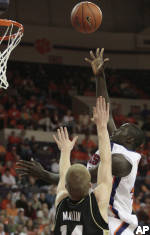 CLEMSON, S.C. (AP) – K.C. Rivers wasn’t sure who would make up for the scoring and rebounding usually provided by injured Clemson teammate James Mays.

So Rivers decided to do both himself.

He finished with 18 points and 12 rebounds, hitting a floater with 31.2 seconds to go that broke a tie and led No. 18 Clemson to a 61-58 victory over Purdue in the ACC/Big Ten Challenge on Tuesday night.

“Without Mays,” Rivers said, “I had to fill the void.”

It took some time for the Tigers (6-0) to figure that out.

Mays fell hard on his hip Saturday in a win over Gardner-Webb. He said before the Purdue game he was diagnosed with a fracture and expected to miss four to six weeks.

“He doesn’t know yet,” Purnell said about his senior forward.

Still, Clemson played like a team worried about its 6-foot-9 star for much of this one.

That’s when Trevor Booker tied the game for the Tigers with an inside basket and Rivers followed with the go-ahead shot. He drove around the left side and threw up a soft shot that fell in.

Rivers thought his attempt over two defenders was short.

“When I saw that last little roll and it roll in, my heart started pumping real hard,” Rivers said, grinning.

Freshman Robbie Hummel missed an outside shot on Purdue’s next possession and Cliff Hammonds made one of two foul shots to put Clemson ahead 61-58.

Scott Martin had one last try at a 3-pointer for Purdue with 3 seconds to go. But Rivers grabbed his final rebound and Clemson moved to 19-0 in the past three Novembers.

Each time Clemson closed in on the lead in the second half, the Boilermakers would move in front. Still, Purdue couldn’t get more than six points ahead, the last time on Moore’s jumper.

But Rivers hit two foul shots, David Potter made a 3-pointer and Hammonds hit one of two free throws to tie it.

Rivers followed with a driving layup to give the Tigers their first lead in more than 12 minutes, 53-51. But again, Purdue moved in front after Moore’s 3-pointer made it 56-55 with 3:13 remaining.

Purdue coach Matt Painter was pleased his young club hung in as long as it did. But he said when the Boilermakers had a chance to take advantage of Clemson’s poor foul shooting (10-of-26) and Mays’ absence, they couldn’t do it.

“They make their free throws, this game’s over. They win by 10, 15 points,” Painter said. “They didn’t do that. They didn’t have James Mays. You’ve got to keep things in perspective. But I was happy with the effort.”

Hammonds had 12 points, while Potter added 11 with three 3-pointers.

It could be the first of many challenges ahead for Clemson. If Mays’ hip is fractured, he could miss all of December and might not be back until the Tigers begin the Atlantic Coast Conference season.

“I’ve had better days,” he said, his metal crutches resting nearby.

The last time Clemson lost Mays was the 2005-06 season, when it opened 11-0 with him in the lineup. The Tigers lost five of their next seven after he was declared academically ineligible.

And Mays’ presence was missed by the Tigers in this one.

They were outrebounded 20-17 by the Boilermakers while 6-foot-9 Nemanja Calasan had his way around the basket with 10 points and seven rebounds in the first 20 minutes.

Raymond Sykes, starting in place of Mays, picked up two fouls in six minutes of action in the opening half. Freshman forward Jerai Grant (6-foot-8) had just one rebound in 10 minutes.

Crump scored four of his team’s final six points of the half to put Purdue ahead 26-23 at the break.

Clemson was expected to wear down the younger Boilermakers – Painter started two sophomores and three freshmen – with its size and outside shooting.

Instead, the Tigers were way off target. Rivers made one of his seven 3-pointers in the first half and Clemson was just 9-of-27 before the break.

The fact that Clemson hung tough and won despite the mistakes and without its star – Mays had averaged nearly 15 points and nine rebounds this season – will serve the Tigers well later on, Hammonds said.

“We lost a lot of games like this last year,” Hammonds said. “We’re the type of team that’s going to work each and every night.

“We’ve got to get tougher,” he added.