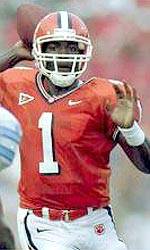 No. 16 Clemson Kicks Off ACC Football Season Against Wake Forest

CLEMSON, S.C. (AP) – With an offensive and defensive unit firing on all cylinders, No. 16 Clemson attempts a three-victory start to the season for the first time in nine years when the Tigers play host to Atlantic Coast Conference rival Wake Forest.

Clemson (2-0) has racked up a remarkable 100 points in the season’s first two games for the first time since 1929. The Tigers opened the campaign with a 38-0 blanking of The Citadel and coasted to a 62-9 rout of Missouri on Saturday.

The 62 points represented the most scored by Clemson since an 82-24 drubbing of Wake Forest on Oct. 31, 1981, the year the Tigers won the national championship.

Despite the offense, Clemson’s defense did the most damage against Missouri, creating six turnovers that converted into 34 points.

Woodrow Dantzler threw two touchdown passes and ran for another score as Clemson outgained Missouri, 481-216, including a 206-72 advantage on the ground. Dantzler is an impressive 28-for-36 for 380 yards and five TDs this season.

“When you get six turnovers, that’s what has the potential to happen,” Clemson coach Tommy Bowden said. “You can get 60 and still not be productive on offense. Six turnovers allowed the game to get out of hand.”

Bowden’s teams are no strangers to offensive production. In his 36 games at Tulane and Clemson, Bowden’s teams have reached the 40-point mark 16 times while averaging 36.

This will be the 1,000th game in Clemson history. The Tigers are 564-390-45 overall, with 50 of those victories coming against Wake Forest. Clemson has won 20 of the last 23 meetings with the Demon Deacons.

Last season’s 7-5 record was Wake Forest’s best mark in seven years, but that momentum has not carried over so far this season.

The Deacons opened with a surprising 20-16 loss to Appalachian State and held a 14-10 halftime lead over ACC foe North Carolina on Saturday, only to surrender 21 unanswered points in the final 30 minutes in a 35-14 setback.

The 0-2 start is the first since 1995 for Wake Forest, which has been outscored 25-0 in the second half this season.

Wake Forest’s defense, which returns only one starter from last year, has allowed 55 points thus far, although that unit was on the sidelines for 14 of North Carolina’s points Saturday. The offense struggled mightily in that game, collecting minus-two yards rushing while sophomore quarterback Ryan Leak was sacked eight times.

The Deacons were 2-1 against ranked opponents last season, posting wins over No. 25 North Carolina State and No. 14 Georgia Tech.