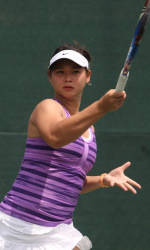 No. 15 Virginia Tops No. 22 Clemson in ACC Quarterfinals

CARY, NC – The fifth-seeded and 15th-ranked Virginia Cavaliers defeated fourth-seeded and 22nd ranked Clemson, 4-1,  in the quarterfinals of the ACC Tournament on Friday in Cary, NC. Clemson (15-9, 8-3 ACC) had defeated the Cavaliers (18-6, 7-4 ACC), 6-1, just 13 days ago in Charlottesville, but Virginia’s lineup shifts on Friday turned out to be the difference in the match. Clemson will now await word on an NCAA Tournament bid after closing with a 15-9 record, although eight of the nine losses were to top-15 teams. The first and second rounds take place on May 11-12 at campus sites. On April 7, Clemson won the doubles point and then singles matches at each of the top five positions. Today, Virginia’s shuffled lineup jumped on Clemson early with breaks in each of the three doubles matches, and clinched the doubles point with a pair of 8-3 victories on courts one and two. In singles, Romy Kölzer beat Charyssa Peretz, 7-6(2) on court six. But the Cavs claimed two other first-set tiebreakers, and Hana Tomljanovic beat Romy Kölzer and Romy Kölzer (CU) led Caryssa Peretz (VA), 7-6(2), 3-6, 3-2 DNFOrder of Finish: 4,2,1,3