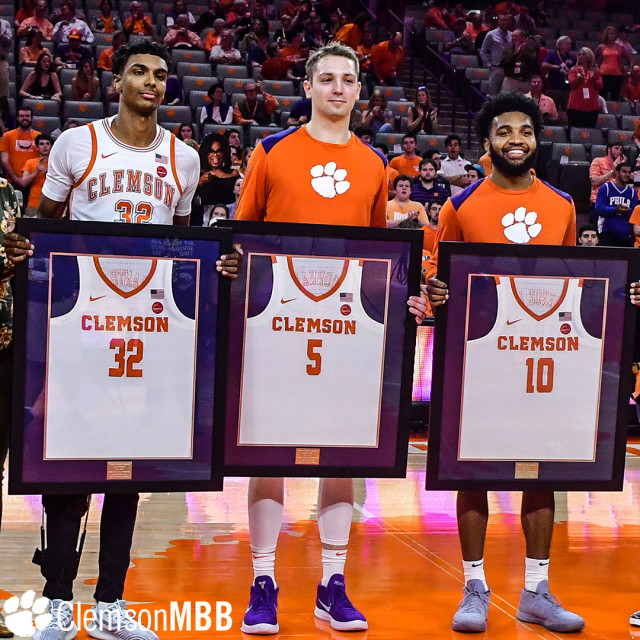 No. 15 Tigers Buzz Past Yellow Jackets on Senior Day

CLEMSON, S.C. — Clemson University men’s basketball overcame an 11-point second half deficit using a 22-3 second half run to tie the program record for ACC wins in a season with a 75-67 victory over Georgia Tech from Littlejohn Coliseum on Saturday afternoon.

The win on Saturday marks the second time this season that Clemson has overcome a double-digit deficit to win against Georgia Tech – sweeping the season series.

The Tigers (21-7, 10-6 ACC) were led on Senior Day by senior guard Gabe DeVoe who tied his career-best with 25 points on 7-of-13 shooting, including 4-for-7 from deep. DeVoe finished 7-for-9 at the charity stripe – setting a new career-best for free throws made in a game.

In his return to action, Shelton Mitchell chipped in 14 points and finished a perfect 6-for-6 at the foul line. Both Elijah Thomas and Marcquise Reed each poured in 13 points apiece. Mitchell and Reed combined to go 12-for-12 at the foul line on Saturday.

The Tigers struggled for the first part of the second half and found themselves down by a game-high 11 points on multiple occasions – the last coming at 58-47 with 10:28 left.

A monumental 22-3 run would propel the Tigers from down 11 points to leading by eight at 69-61 with 48 seconds left in regulation. Clemson would keep Georgia Tech at bay with made free throws down the stretch to seal the eight-point victory.

After getting zero points from their bench against Virginia Tech on Feb. 21, the Tigers bench outscored the Yellow Jackets’ bench 27-5 – its third-most bench points scored all season and its most since posting 42 in a win over Louisiana-Lafayette on Dec. 22.

Clemson returns to action on Wednesday, Feb. 28 in its final game of the season when it hosts Florida State. Tipoff is slated for 9 p.m. on ESPNU.

Notes: Clemson snapped its three-game losing streak with the win … it marked the second time this season that Clemson overcame a double-digit deficit against Georgia Tech and swept the season series against the Yellow Jackets … Clemson tied its program record for ACC wins in a season with its 10th this afternoon … the Tigers have achieved 10 wins in the ACC on six occasions – three have come under the direction of head coach Brad Brownell … Gabe DeVoe once again tied his career-best with 25 points for the third time this season … DeVoe topped his career-best with seven made free throws … with 30 free throw attempts, it marks the most attempts from the line for the Tigers since 30 in a 71-69 win over Florida on Dec. 16 … the 27 bench points were the third-most scored by Clemson this season and the most since a win over Louisiana-Lafayette on Dec. 22.