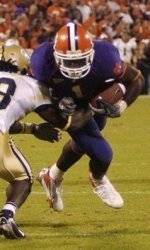 Behind James “Thunder” Davis, C.J. “Lightning” Spiller and a defense that held Georgia Tech star Calvin Johnson without a catch for the first time in his career, the 12th-ranked Tigers got a surprisingly easy 31-7 victory over the 13th-ranked Yellow Jackets on Saturday.

The powerful Davis rushed for a career high 216 yards and two touchdowns. The quick, elusive Spiller had a 50-yard touchdown run and a 50-yard TD catch. And the Tigers defense made sure they didn’t hear Johnson’s name very much in the game after hearing it all week long at practice.

“If I had a nickle for every time they said, ‘Calvin Johnson,’ I’d have a lot of money in my pocket,” Clemson linebacker Antonio Clay said.

Davis and Spiller proved that some of the league’s best offensive stars are in Clemson’s backfield.

Davis, the Atlantic Coast Conference’s leading rusher, got the Tigers (7-1, 4-1 ACC) scoring started with a 2-yard TD run and finished with his seventh career 100-yard rushing game. Spiller added a 50-yard scoring run in the third quarter and answered the Yellow Jackets’ (5-2, 3-1) only score with a 50-yard catch and run to help Clemson to its sixth straight victory.

Davis is an Atlanta native who talked quite a bit this week about having a big game against his hometown school. “I wanted this one a lot,” he said. “I thought about it all the time.”

He gained 66 of Clemson’s 71 yards on its first TD drive, ending things with a 2-yard scoring run. In the second half with Clemson ahead 10-0, Davis opened the series with a 22-yard run and Spiller finished it a play later with the first of his two 50-yard scores.

“It’s a pretty good feeling to have running backs like James Davis and Barry Richardson said. “Whey you have two backs making plays like they did tonight, it makes us tough to beat.”

When it was over, Davis told everyone still watching about Clemson’s “Thunder” and “Lightning” pairing. “How’s that sound?” he said. “Can’t we get a little hype on that?”

The Georgia Tech-Clemson rivalry has typically been one of the league’s most exciting with nine of the games since 1996 decided by five points or less.

Davis, Spiller and the Tigers’ D turned this one into a runaway.

The Tigers clamped down on Johnson, who came in leading the conference with 35 catches for 559 yards, yet was never much of a factor in the showdown between the ACC’s highest-ranked teams.

Johnson made a name for himself as a freshman at Death Valley two years ago, catching three touchdown passes including the game-winner in the final moments of the Yellow Jackets’ 28-24 victory. He entered this one with three straight 100-yard receiving games, all Tech victories, and looked like he would again wreak havoc on the Tigers when he drew a pass interference penalty on Tech’s first play.

But that was it. Johnson didn’t catch either ball thrown to him in the second half.

Johnson did not talk to reporters after the game. “We just didn’t make plays and they did. That’s all it is,” Georgia Tech quarterback Reggie Ball said several times.

Georgia Tech closed to 17-7 in the fourth quarter when its other receiving Johnson, James, hauled in a 35-yard pass off Clemson defender Crezdon Butler with 13:31 left.

Spiller, a freshman, ended all thoughts of a comeback when he took Will Proctor’s flip pass, stopped to let the defenders slide past and headed down the right sideline for the score and a 24-7 lead.

Davis finished the scoring, setting up his own 5-yard touchdown with a 54-yard run. Davis has 16 touchdowns this season, two shy of Travis Zachery’s school record set in 2000.

Spiller had 116 yards, his third game with more than 100 yards rushing.

It was just the second-ever matchup of teams ranked in the top 13 at Death Valley, and the Tigers took advantage. Clemson fans filled Bowman Field 10 hours before kickoff, then the Tigers came out after warmups in all-purple uniforms – a color scheme school officials said hadn’t been used in the “modern era” of football.

The Tigers had their first-half struggles. Proctor was intercepted by Djay Jones to end Clemson’s opening possession and a second-quarter drive ended on Tyler Grisham’s fumble.

The only sign of offensive life was Davis’ touchdown drive. The sophomore gained 66 of the Tigers 71 yards on the series, ending things in the end zone with a 2-yard scoring run.

Davis spent the rest of the half on the sidelines, slowed by a hard hit on the drive that caused his shoulder pads to need an adjustment. He sat on a back bench with his gear off as trainers took the pads back to the locker room.

Georgia Tech tried to get Calvin Johnson involved in several ways. He took a pitch on Clemson’s 19 and lost four yards in a drive that ended with a missed field goal.