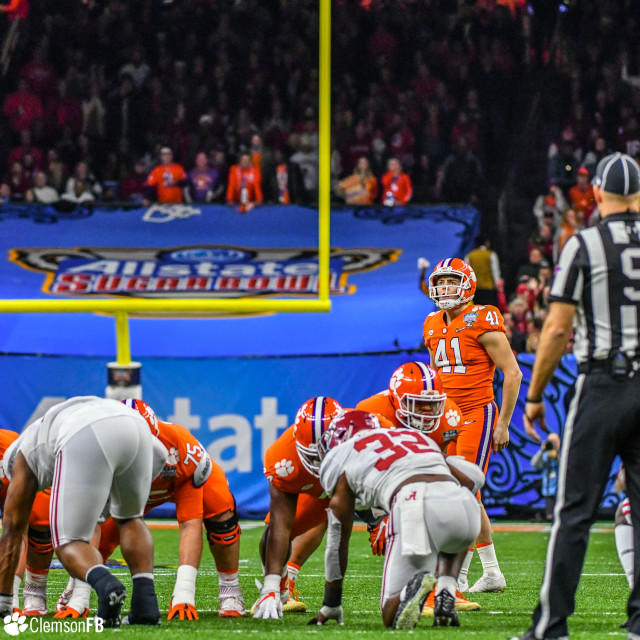 No. 1 Clemson Falls to No. 4 Alabama in Sugar Bowl

NEW ORLEANS – No. 1 Clemson suffered its second and final defeat of the 2017 season on Monday night, falling 24-6 to the No. 4 Alabama Crimson Tide in the Sugar Bowl and College Football Playoff Semifinal. With the loss, Clemson ended the year with a 12-2 overall record, while Alabama improved to 12-1 overall and will play No. 3 Georgia in the National Championship Game.

After Clemson forced a three-and-out on Alabama’s first drive, the Crimson Tide capitalized on their second drive by making a 24-yard field goal to take a 3-0 lead with just over five minutes remaining in the first quarter. Alabama upped its lead to 10-0 as time was expiring in the first quarter when Jalen Hurts connected with Calvin Ridley for a 12-yard score.

Clemson got on the board five minutes into the second quarter on an Alex Spence 44-yard field goal. Deon Cain, who finished the game as the Tigers’ leading receiver, had two catches for 27 yards to power the scoring drive that brought the Crimson Tide lead to 10-3. Both defenses proved stout for the rest of the half, with either team’s best scoring chance coming on a failed 38-yard field goal by Alabama with 17 seconds left.

The Tigers opened the second half by cutting Alabama’s lead to 10-6 on a Spence 42-yard field goal. The score was set up by Kendall Joseph causing and recovering a fumble on the Alabama 20-yard line on the Crimson Tide’s first play of the half. A few drives later, Alabama’s Da’Ron Payne intercepted a Bryant pass and returned it 21 yards, paving the way for Hurts to find Payne for a one-yard touchdown pass. Alabama found the endzone again, as Mack Wilson intercepted Bryant’s first pass on the next Clemson drive and returned it 18 yards for a score with just over five minutes remaining in the third quarter.

After the pick-six, the Tide took a 24-6 lead into the final 15 minutes, and that proved to be the final score after both defenses kept the offenses at bay.