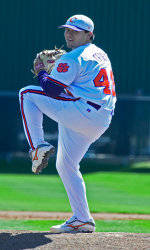 Clemson, SC – Ninth-ranked North Carolina rode the left arm of Andrew Miller to a 2-1 victory over Clemson Friday night in front of 2,953 fans at Doug Kingsmore Stadium. The Tar Heels improved to 15-3 overall and 2-0 in the ACC, while the Tigers dropped to 6-8 overall and 0-1 in the ACC.

Miller (5-0) earned the win for the Tar Heels, as he carried a no-hitter into the sixth inning for the second time this year. The sophomore pitched 7.0 innings, giving up one unearned run and two hits. He also struck out 11 Tiger batters. Jonathan Hovis notched his first save of the season for North Carolina, keeping the Tigers scoreless over the final two innings.

Josh Cribb (1-2) took the loss for Clemson. Cribb pitched a career-high 7.2 innings, giving up two runs on eight hits. He also had a career-high 10 strikeouts and no walks.

Each pitcher faced the minimum through two innings before the Tar Heels got on the board in the third. Freshman Reid Fronk singled to center to start the inning. On the following play, he was tagged out in a run-down between third base and home after a double by Chase Younts. Younts advanced to third on the play and scored on a bloop single by Josh Horton.

The Tar Heels scored again in the fifth. Mike Daniel was hit by a pitch to begin the inning, and scored on Fronk’s double to the gap in right-center with one out. Fronk had three of the Tar Heels’ nine hits. Cribb struck out the next two North Carolina batters to prevent further damage.

The Tigers threatened in the bottom of the fifth when David Williams led off with a walk. Miller attempted to pick off Williams at first, but his first throwing error of the year allowed Williams to advance to second. The ball rolled under the fence behind first base, meaning Williams had to stop at second base. Andy D’Alessio grounded out to second with one out on a play that would have scored Williams had he been at third base. However, it only advanced him to third base and Miller got a strike out to end the Clemson threat.

Clemson did not get its first hit until there was one out in the bottom of the sixth on Taylor Harbin’s looping single to centerfield. Harbin advanced to third on another throwing error by Miller on a pick off attempt. With two outs, Kris Harvey’s “swinging bunt” single down the third base line on a 1-2 pitch scored Harbin to trim the Tar Heel lead to 2-1.

Clemson had a chance to tie the game in the seventh but Miller struck out two Tiger batters with men on base to end the inning.

Hovis came in to begin the eighth and worked out of a jam to keep the Tar Heels on top. The Tigers had a runner on third base with one out, but Hovis struck out Harvey and Tyler Colvin flew out to end the inning.

Hovis followed it up with a perfect ninth inning to record the save. Harbin led the Tigers with two of the team’s three hits.

The Tigers and Tar Heels meet in game two of the three-game series Saturday at Doug Kingsmore Stadium. The game will be televised by C-SET. First pitch is scheduled for 4:06 PM.