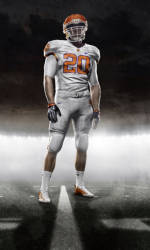 BEAVERTON, OR – On Saturday, November 28, the Clemson University football team will take the field wearing the Nike Pro Combat uniform, a new system of dress and the lightest football uniform Nike has ever created. Clemson will be one of eleven elite football programs to debut the Nike Pro Combat uniform this month before they are officially introduced to the broader market at the start of the 2010 season.

According to Clemson University officials, the game pants will be used on a one game basis only. The team will return to their traditional game pants after November 28.

Designed from the inside out, the Nike Pro Combat uniform begins with the Nike Pro Combat padded base layer. Strategically placed padding zones in the Nike Pro Combat Deflex shorts cover the thighs, hips, and tailbone. The padding zones are comprised of dual-density foam cells that absorb, deflect and disperse the impact of on-field collisions. A foam grid intersects the cells to maximize impact absorption and increase flexibility. A hard plastic shield covers the thigh padding where impact frequently occurs.

With the padding incorporated into the base layer, players gain greater mobility over traditional padding and the outer uniform becomes a lightweight, breathable shell with a sleek, explosive look.

“Players need their uniforms to be as light as possible so they can play the game at top speed,” said Kris Aman, Global VP and General Manager for Nike Athletic Training which includes football. “The Nike Pro Combat uniform is a modern system of dress that is dramatically lighter while providing durability and protection.”

Nike scrutinized every detail of the Nike Pro Combat uniform with the goal of shedding as much weight as possible, right down to the D-ring on the belt. Nike opted for a titanium D-ring, which is extremely durable and 66 percent lighter than the standard steel belt enclosure.

Engineered high-tenacity yarn inspired by Nike Flywire is incorporated into the high impact shoulder area. The belt loops have been padded to provide added protection to the hip area without the bulk of traditional hip pads.

The new uniforms also feature improved ventilation and breathability. Side ribbed-piping on the uniform pant has been replaced with sublimated Nike Dri-FIT mesh, which not only shaves grams off of the pant weight, but also aids evaporation in key areas. Nike Dri-FIT mesh wraps behind the knees, a key cooling zone on the body. By adding innovative evaporation and cooling zones, the player’s body expends less energy regulating body temperature, leaving more energy for the game.

Completing this true system of dress for football is the new Nike Zoom Vapor Fly cleat, which Nike customized for Clemson featuring the Tigers team colors, team logo, and chrome-plated outsole. This incredibly lightweight cleat at just 10 ounces is available in 2010. It features Zoom Air cushioning in the heel and Flywire engineering in the medial and lateral quarter panels.

Inspiration to Succeed Nike designers immersed themselves in Clemson Tigers history and lore to bring inspirational cues to the look and direction of the Nike Pro Combat uniforms. The new look is best described as “modern classic.”

Nike designers gave a nod to the Clemson look from the early 1980’s, including the undefeated National Championship team from 1981, when creating the Tigers’ Nike Pro Combat uniform.

The front of the jersey features a simple bold number font with a traditional purple outline. An iconic tiger paw is on the front chest and on the jersey sleeves. On the pant Nike added a bold, speed stripe of orange.

Head coach Dabo Swinney dubbed the team mantra for the season, “ALL IN,” which is embroidered inside the collar of every jersey.