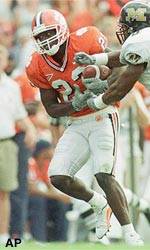 New ACC To Bring Together Past Foes

The date July 1, 2003 will go down as a significant day in the history of the Atlantic Coast Conference. On that day, it was announced by league commissioner John Swofford that two universities would be joining the ACC. Miami and Virginia Tech, both of the Big East Conference, decided to accept the ACC’s invitation to expand.

The ACC’s desire to expand its rapidly-growing football prowess led to the courting of the two schools, who in recent years have boasted successful football programs. Miami and Virginia Tech have appeared in three of the last four National Championship games, with the Hurricanes taking the title in 2001. Miami has a total of five National Championships, all within the last 20 years.

Despite the fact that Miami and Virginia Tech have never been in the same conference as Clemson, the history between the schools is not bare. In fact, Clemson has competed against Miami 119 times in nine different current sports and 123 times against Virginia Tech. In football, the Tigers have faced the Hurricanes five different times and the Hokies a total of 28 times.

The Virginia Tech series dates to 1900, the fifth year of Clemson football. The Tigers won that inaugural meeting by a score of 12-5. That Clemson squad was coached by college football legend John Heisman. The series was played off and on over the next several years. In 1945, Clemson gained its largest margin of victory over Virginia Tech after it defeated the Hokies 35-0 at home. Frank Howard coached Clemson during that time, and actually had a 5-1 record against Virginia Tech during his 29-year tenure as the Tigers’ head coach.

The most significant era between Clemson and Virginia Tech was the period from 1977-1989, as the two schools squared off 10 times. Clemson was victorious in nine of the 10 contests. Former Tiger Head Coach Danny Ford guided Clemson to a 7-1 record against the Hokies during his tenure.

The most publicized game of that era took place in 1984 at Clemson. The top two defensive linemen in college football that year were Virginia Tech’s Bruce Smith and Clemson’s William Perry. Both were finalists for the Lombardi Award and they faced off at Clemson in November. Clemson came away with a 17-10 victory but, it was another Perry who proved to the be the key for Clemson. Freshman Michael Dean Perry, who would go on to a six-time NFL Pro Bowl career, had three tackles for loss and 10 tackles to lead the Clemson defense. Smith had a terrific came for the Hokies, but the Tigers came away with the victory.

The only loss to Virginia Tech during that period came in the season opener of the 1986 season, a 20-14 Hokie victory. Clemson went on to an 8-2-2 season and won the ACC championship, while Virginia Tech finished 9-2-1 and captured a bowl victory in the Peach Bowl under Head Coach Bill Dooley.

The two teams did not meet again until the 1998 season. That year, the Hokies handed the Tigers a lopsided 37-0 defeat in Death Valley. Tommy Bowden, Clemson’s current head coach, faced Virginia Tech in just his third game with the Tigers, a Thursday evening nationally televised contest in Blacksburg. However, Clemson trailed by just 17-11 and had the ball with seven minutes left, but All-American lineman Corey Moore recovered a fumble and raced for a touchdown. Virginia Tech and quarterback Michael Vick lost in the National Championship game to Florida State in the Sugar Bowl to close that season.

Clemson and Virginia Tech met again at the end of the 2000 season, this time in the Toyota Gator Bowl. Clemson entered the game with a 9-2 record and top-15 ranking, while Virginia Tech was 10-1 and a top-five team. The game featured opposing multi-talented quarterbacks in Michael Vick of Virginia Tech and Woodrow Dantzler of Clemson.

Vick, the No. 1 pick of the 2001 NFL Draft, accounted for two touchdowns in the contest. Dantzler, who was still a bit hampered by a nagging ankle injury, totaled 261 yards of offense to lead Clemson. The Hokies emerged victorious, winning by a score of 41-20. Rod Gardner, current wide receiver for the NFL’s Washington Redskins, caught a touchdown pass in his final collegiate game and became Clemson’s career reception leader.

Overall, Clemson holds a 17-10-1 advantage over Virginia Tech. Frank Beamer, who has turned the Hokie program into a perennial top-20 team, is 3-3 against Clemson as Virginia Tech’s head coach. He lost three in a row from 1987-1989, but has guided the Hokies to three straight wins over Clemson.

The history between Clemson and Miami is less significant in that there have been just five contests, none since 1956. However, two of the games have been New Year’s Day bowl contests. The first meeting between Clemson and Miami came in 1945, when the Hurricanes narrowly protected their home field with a 7-6 edge over the Tigers. The next meeting between the two came at the end of the 1950 season in the Orange Bowl, Miami’s home stadium.

Clemson entered the game ranked 10th in the nation, while Miami was 15th according to the Associated Press. Clemson held a 7-0 lead at halftime, thanks to Billy Hair’s long pass to Bob Hudson that set up the touchdown. Fred Cone, who carried the ball a still Clemson bowl record 31 times, plunged in from one yard out.

Miami put 14 points on the board in the third period and blocked an extra point attempt by Clemson, giving the Hurricanes a 14-13 lead heading into the final quarter. With four minutes left Miami found itself in deep trouble after three penalties pushed the Hurricanes back toward their own endzone. Miami pitched the ball to Frank Smith, who was tripped in the endzone by Sterling Smith, giving Clemson a safety and a 15-14 Orange Bowl victory. It remains the latest game-winning safety in Clemson history.

The two squads met again the following year in the 1952 Gator Bowl. This time, Miami emerged victorious. The Hurricanes defeated the Tigers 14-0, despite being outgained in yardage by the Tigers. Clemson turned the ball over five times in the contest.

Clemson and Miami met again in 1953 and 1956, with the Hurricanes gaining victory both times. In 1956, Miami defeated the ACC Champion Tigers 21-0. Miami leads the series 4-1 over Clemson, with all five games coming during the Frank Howard era.

Clemson is certainly familiar with both programs and will be looking forward to renewing history with both Miami and Virginia Tech.