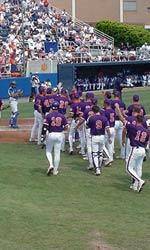 Mike Prochaska turned in the best performance of the season by an opposing pitcher to lead NC State to a 3-0 victory over top-ranked Clemson Saturday afternoon at Doug Kingsmore Stadium. NC State (21-12, 2-6 ACC) evened the series and handed Clemson (26-2, 4-1 ACC) just its second loss of the season.

Prochaska was dominant, allowing only four hits on the day while walking four and striking out six. The hurler threw just the second shutout by an opposing pitcher at Doug Kingsmore Stadium under Head Coach Jack Leggett. North Carolina’s Scott Autrey threw a four-hitter in a 4-0 victory on April 29, 2001.

Matt Henrie (6-1) picked up his first loss of the season for Clemson. The junior yielded only two runs off of seven hits in 6.2 innings while walking four and striking out three.

NC State tacked on an insurance run in the eighth inning when Matt Butler singled home Jeremy Dutton. It proved to be more than enough for Prochaska, who allowed only two runners to reach second base on the day.

Clemson and NC State will play the rubber game of the series Sunday at 1:00 PM.