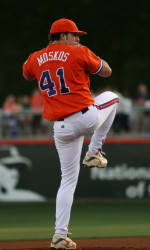 Clemson, SC — Clemson junior left-handed pitcher Daniel Moskos was taken in the first round of the Major League First-Year Player Draft by the Pittsburgh Pirates on Thursday. The native of Alta Loma, CA was the number-four selection of the entire draft, the highest selection by a Clemson baseball player since Kris Benson was taken first and Billy Koch was taken fourth, in the 1996 draft.

Moskos is Clemson’s number-one starter and will be on the mound for the Tigers Friday when Clemson faces Mississippi State in Starkville, MS in the opening game of the Super Regional. It will be his 10th start of the season. Earlier in the year, Moskos was a closer, but he has been a starter the second half of the year.

For his three-year career, Moskos has a 10-12 record with a 3.05 ERA. He has 143 strikeouts in 144 2/3 innings. Entering the NCAA Super Regional, Moskos has 16 saves, fourth best in Clemson history. His 80 career appearances are fifth most in school history.

Moskos had an outstanding summer of 2006 when he had a 0.86 ERA and six saves in 18 appearances for the United States National team. He helped that team to the Gold Medal of the World Championships in Cuba with 35 strikeouts in just 21 innings.

There is a Clemson connection with the Pirates organization. General Manager David Littlefield was an assistant coach at Clemson under Bill Wilhelm from 1986-88.

“This has been a big day and I am very excited. It is a dream come true. At this point I am just taking it all in. I had some butterflies when I woke up this morning. I have to admit I was nervous, but there is a sense of relief now. It has been one of the most exciting days of my life. There was a rush of emotion.

“It didn’t surprise me that the Pirates took me because I know they had been to see me play. It was just a shock to see your name on the TV screen. It just hasn’t all settled in.

“It doesn’t make any difference whether I am starter or come out of the bullpen. I hope I am given an opportunity to start, but I just want to get on the field. I am OK with either.

“I have matured over my career at Clemson. When I came out of high school, I just thought I could throw the ball by hitters. But you can’t do that, you have to pitch.

“I have a job to do tomorrow for my teammates against Mississippi State.”