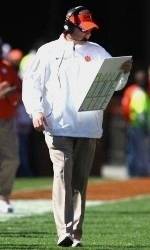 CLEMSON, SC – Clemson offensive coordinator Chad Morris has been named the national Offensive Coordinator of the Year by Rivals.com.

Morris took the Tigers to school records in terms of passing yardage, total yardage and scoring offense in his first year with program, helping the Tigers to a 10-3 record and ACC Championship. Clemson has improved its total offense by over 100 yards per game over last year and has improved from 88th in the nation to 29th. Clemson has also improved from 78th to 21st in passing offense.

The Tigers have a 1000-yard rusher (Andre Ellington) and a 1000-yard receiver (Sammy Watkins) for just the third time in school history, and quarterback Tajh Boyd has established school marks for passing yardage, touchdown passes, touchdown responsibility and total offense in a season.

He accomplished these statistics against a schedule that has included games against five top 25 teams, including two victories over Virginia Tech, who was ranked third by the USA Today entering the ACC Championship. That tied or the highest ranked team Clemson has beaten in its history.