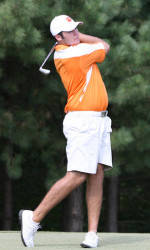 CLEMSON, SC – Clemson golfer Corbin Mills overcame a four-shot deficit with eight holes to play and won the Players Amateur at Belfair Plantation in Bluffton, SC on Sunday. Mills shot a final round 72 to finish at 12 under par 276 for the 72-hole event. With the victory, Mills will be extended an invitation to the Heritage Invitational on the PGA Tour in April 2012.

Mills, who had rounds of 67-69-68-72, defeated Curtis Thompson of Coral Springs, FL and Patrick Rodgers of Avon, IN by one shot.

It was the second consecutive victory in a major amateur tournament for Mills. The junior won the United States Public Links Championship in Oregon last week.

The native of Easley, SC led after each of the first three rounds, but got off to a bad start on Sunday with four bogeys on the first 10 holes. He dropped to eight-under par for the tournament and was four shots behind Eric Chun, who made five birdies in his first eight holes and got to 12 under par.

But, Mills got back on track on the 13th hole when he made a two-putt birdie on the par five hole. He then hit his approach to the par four 14th hole to six feet and made the putt for a second straight birdie. He then birdied the 16th hole when he made a 15 foot putt. He made a fourth birdie on the back nine when he drove the 295-yard par four 17th hole. He two putted for birdie there and got to 12 under par.

Playing in the final group, Mills knew he needed just a par on the final hole so he hit a two-iron off the 18th tee, but he drove it in the rough. He hit his second shot 25 feet short of the green, but got up and down to win the tournament by a shot. His final putt was from five feet, just about the same distance of his winning putt in the US Public Links.

“I gave up the lead on the front nine, but I didn’t lose my confidence,” said Mills. “I didn’t putt well, but overall, I didn’t think I was playing that bad. I saw on the scoreboard that I was four down, but it felt like the Public Links when I lost five straight holes in the middle of the second round of the day.

“I got things back on the 13th hole when I made a birdie, then made another on the 14th. I drove the green on 17 and that was important so I could make a two-putt birdie. The second nine I trusted the line on my putts and just got them to the hole.

“It has been quite a two weeks. I am looking forward to a week of rest. I will be honored to play in the Heritage next year.”