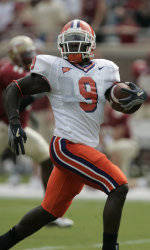 “I want to thank all the Clemson coaches, especially Coach (Tommy) Bowden, all the fans and everyone associated with Clemson who allowed me to have a great college experience the last three years. I will miss Clemson, this was a tough decision.

“But, after taking a long look at my options professionally, I feel it is the time to enter the NFL draft. I have not made a quick decision. I did not make a final decision until this week. I have gone about this the right way and feel I am ready to play in the NFL.

“I will always bleed purple and orange and will be a Tiger at heart. I will do whatever I can to represent Clemson in a positive way in the future.”

Miller leaves Clemson with many records and top 10 school rankings. He had 13 interceptions for his three seasons, third in Clemson history behind College Football Hall of Fame Inductee Terry Kinard and Fred Knoebel. Miller also ranks fourth in Clemson history in career passes defensed with 44 on 13 interceptions and 31 passes broken up. He is the school’s career leader in kick returns for touchdowns with five and in terms of kickoff return average. His 30.68 career average on 50 returns is the best in ACC history and the fourth best in NCAA history.

In 2004, Miller had 54 tackles, the second consecutive year he had that exact number on 46 first hits and eight assists. He had three interceptions and nine passes broken up for 12 total passes defensed. He averaged 33.1 yards per kickoff return to lead the nation and he also had a 13.0 average in terms of punt returns. His season included a 282-yard performance on kickoff returns at Florida State that established an NCAA record for a single game. He also tied an NCAA return with two kickoff returns for touchdowns.

A durable player, Miller played in every game of his three year career (37), including each of the last 31 as a starter in the secondary. Miller had three kick returns for touchdowns this season, the aforementioned kickoff returns against Florida State and a punt return for a score in the overtime win against Wake Forest. Miller earned second-team All-ACC honors as a defensive back and kick returner in 2004 and was named a second-team All-American as a kick returner by Rivals.com.

“I wish Justin all the best,” said Clemson Head Coach Tommy Bowden. “He went about this decision process in an organized, professional manner. He and his mother sought advice from the right people, and communicated with us every step of the way.

“I look forward to following his career at the next level. He made a great contribution to our program as a defensive back and as the best kick returner I have ever coached. Some of his records will be hard to break.”

Miller is the sixth Clemson player to turn pro with eligibility remaining since Tommy Bowden became the Clemson head coach at the end of the 1998 season. Rahim Abdullah and Corey Hulsey both turned professional prior to Bowden’s first year. Keith Adams left at the end of the 2000 season and Derrick Hamilton and Donnell Washington turned pro after the 2003 season, their respective red-shirt junior years.

Overall, Miller is the 12th Clemson player with eligibility remaining to turn professional since the conclusion of the 1989 season. Nine of the previous 11 have been drafted and 10 of the previous 11 have made an NFL roster. The only one who did not was Ronald Williams, Clemson running back from 1990-92 who played in the Canadian Football League for a decade.