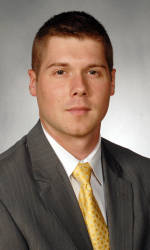 Michael Morrell Promoted to Director of Operations for Men’s Basketball

Clemson, SC – Michael Morrell has been promoted to the position of director of men’s basketball operations at Clemson, Head Coach Oliver Purnell announced Thursday. Morrell previously worked as a graduate assistant on Purnell’s staff for the 2007-08 season.

“Mike did an outstanding job for us as a graduate assistant,” Purnell said. “He certainly distinguished himself as a good basketball person and a hard worker. I feel he will continue to grow in his role as director of basketball operations.”

As the team’s graduate assistant, Morrell had multiple responsibilities which included film breakdown for opponent scouting, organizing recruiting mail-outs, and assisting with the coordination of the Oliver Purnell Basketball Camp. He worked previous camps for Purnell during the summers prior to his hire at Clemson.

“I’m thrilled with the opportunity to continue working with the coaching staff in a full-time capacity,” Morrell said. “I learned a great deal as a graduate assistant last season and look forward to the future with Clemson basketball.”

Before being hired as a graduate assistant, Morrell spent two years at King College in Bristol, TN, where he served as the school’s golf coach and was an assistant with the men’s basketball team. He helped the Tornadoes to a 23-11 overall record in 2006-07 on the hardwood.

Morrell was a two-sport athlete at Milligan College in northeast Tennessee. He scored over 1,400 points in his basketball career, a figure that ranks among the top 10 in school history. He was a three-year starter and helped the Buffaloes to a berth in the NAIA National Tournament as a freshman in 2000-01. As a golfer, he was two-time all-conference and led the team to a league title in 2003. He earned a bachelor’s degree in history from Milligan College in 2005.