"They're asking for a show, baby… they're about to get one."

Enjoy every second of his highlight… pic.twitter.com/bL4nEHIB1f

CLEMSON, S.C. — No. 1 Clemson (4-0, 3-0 ACC) extended its longest home winning streak in school history to 25 with a 42-17 victory in its first clash with the Miami Hurricanes (3-1, 2-1 ACC) in Death Valley since 2010. In addition, the Tigers increased their FBS-record Saturday winning streak to 47. Clemson’s defense kept the Hurricanes offense in check all night, allowing only 210 yards, while the offense piled up 550.

Trevor Lawrence was 29-41 passing for 292 yards and three touchdowns and Travis Etienne ran for 149 yards and two scores and caught a game-high eight passes for 73 yards. In the process, he extended his school record for 100-yard rushing games to 19 and became the first non-kicker in ACC history to score 400 points.

Sheridan Jones, Derion Kendrick and Kane Patterson all had interceptions while the pass rush totaled five sacks, which marked the 10th straight game the Brent Venables-led unit got to the quarterback multiple times.

Clemson opened the scoring with a 10-play, 75-yard drive, culminating in a screen pass to Braden Galloway that went for a 24-yard touchdown, his first of the season. Clemson controlled the ball for 12:31 of the first quarter and ran 25 plays to Miami’s six. This advantage amounted to a 157-10 difference in yards gained.

Clemson extended its lead to 14-0 on the first play of the second quarter with a two-yard Etienne touchdown rush. The score marked his 39th game with a touchdown, which broke the FBS record for most career games with a touchdown held previously by Florida’s Tim Tebow and Louisiana Tech’s Kenneth Dixon.

After a blocked B.T. Potter field-goal attempt, Miami put its first points on the scoreboard with a successful 42-yard field goal. The Tigers responded with a 70-yard drive that again ended with a Galloway touchdown reception, this time for 11 yards.

The Hurricanes scored their first touchdown of the game as the first half expired when another blocked field-goal attempt by Potter was scooped up and returned 48 yards to the endzone to cut Clemson’s lead to 21-10.

After the two teams traded turnovers, Etienne broke off a 72-yard touchdown run down the left sideline for the first points of the second half. Lawrence added a three-yard touchdown scamper of his own to give the Tigers a 35-10 lead heading into the final frame.

Miami converted a 4th-and-goal from the 7-yard line to score its first offensive touchdown of the game and bring the score to 35-17 with 8:31 remaining in the contest. Lawrence and the Tigers’ offense answered with a seven-play, 65-yard drive, capped off by a 22-yard strike to Davis Allen for a touchdown. Clemson’s defense held and the Tigers improved to 4-0 on the season.

Clemson will hit the road for the first time since the season-opener next week, when the Tigers face Georgia Tech in Atlanta on Oct. 17. Kickoff for that game is scheduled for noon ET. 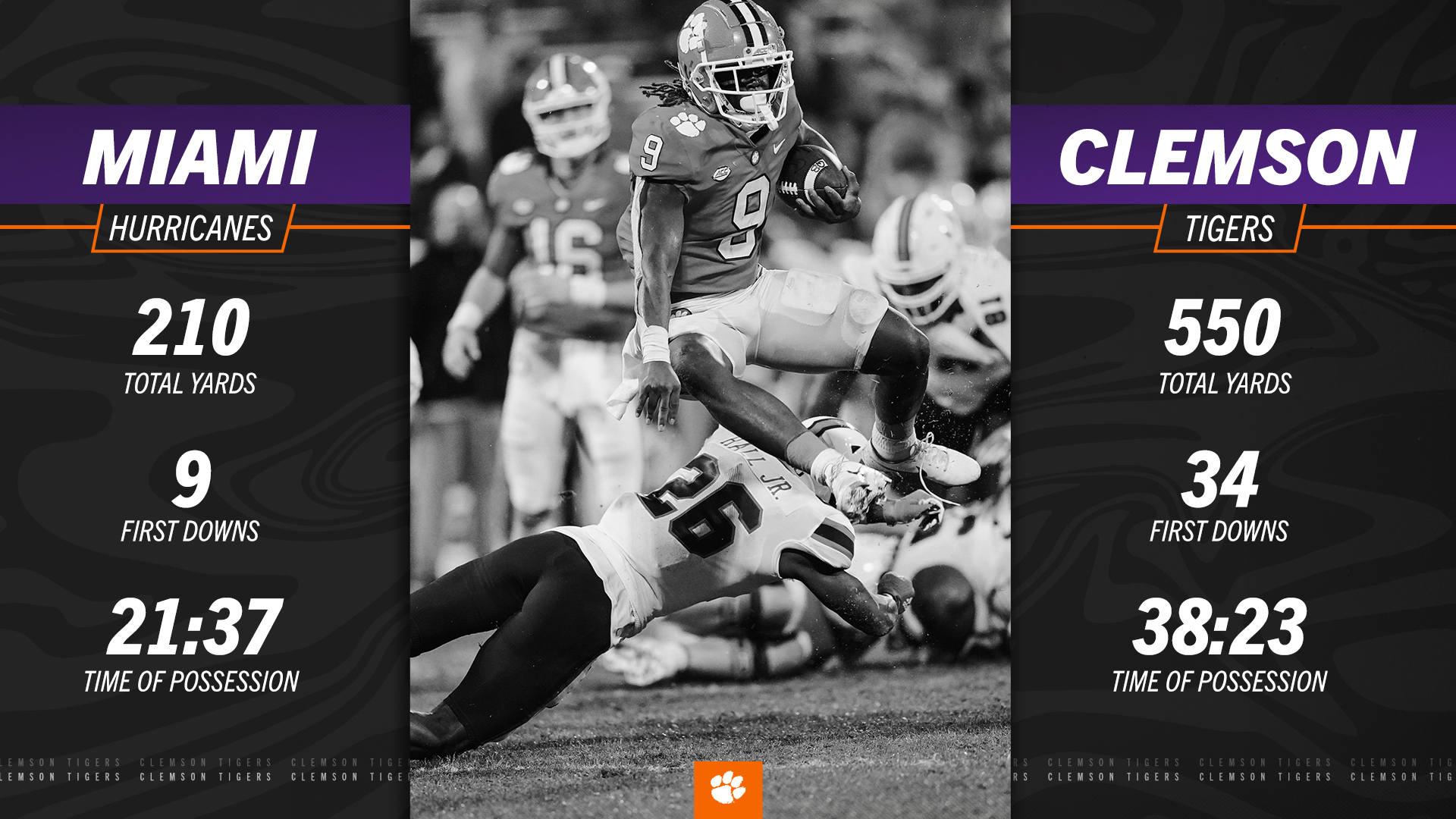 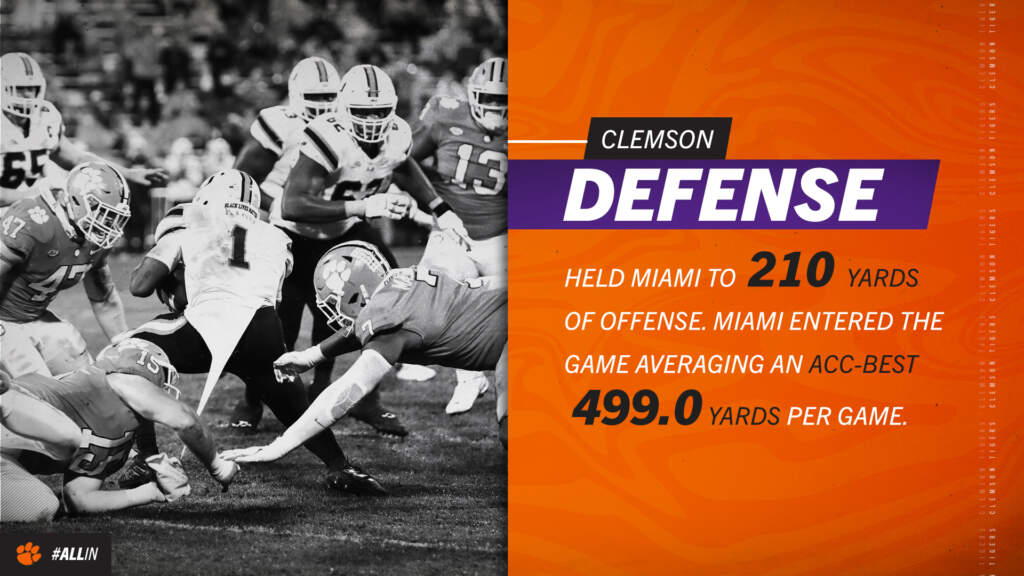