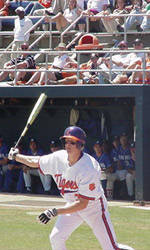 CORAL GABLES, FL – The top-ranked Miami Hurricanes broke a 6-6 tie in the bottom of the sixth inning and went on to a 10-8 victory over the Clemson Tigers in Super Regional action Friday night in front of 4,577 fans at Mark Light Stadium. With the win, Miami needs just one more win in two potential games to advance to the College World Series. Clemson would have to win Saturday’s game to force a game Sunday, which it would have to win also to advance to Omaha.

Miami reliever, Dan Smith, the second of five Hurricane pitchers, got the win for Miami in just 2/3 of an inning to improve to 5-0 on the year. Huguet picked up his 13 save of the season as the Hurricanes improved to 48-12 on the year. Nick Glaser got his third loss of the year against four losses as Clemson dropped to 41-21 this season. Glaser pitched 1 2/3 innings but allowed the go-ahead run in the bottom of the sixth.

Clemson put up three runs on the score board in the top of the first inning thanks to a lead-off walk by Ryan Riley, a base hit by Casey Stone and a double by Jeff Baker that plated Riley. Khalil Greene grounded out to shortstop Javy Rodriguez and scored Stone. Jarrod Schmidt hit a ground to short that was thrown over the head of first baseman Kevin Brown that Baker scored on to give the Tigers a 3-0 lead out of the gate.

Miami added a single run in the bottom of the inning thanks to two doubles. Mike Rodriguez doubled down the right-field line and was scored by Kevin Howard who doubled to right-center field.

Reba walked two of his first three batters in the bottom of the second inning, which proved to be costly when Hurricane center fielder Charlton Jimerson doubled to deep center field to knock in both Kevin Brown and Mike DiRosa who had been given free passes. Miami took a 4-3 lead on a single by Mike Rodriguez that scored Jimerson.

The Tigers added two runs in the top of the third inning to go up 5-4. Greene singled followed by a walk by Michael Johnson. Schmidt singled to bring in Greene and then Kyle Frank singled just out of reach of the short stop to score Johnson.

The Hurricanes got the lead back in the bottom of the fourth thanks to two more doubles given up by Reba. Kris Clute doubled after a strikeout by Brown. DiRosa walked before he and Clute scored on a double by Jimerson. Reba was replaced on the mound by senior Nick Glaser. Reba went 3 1/3 innings in his shortest start of the year allowing six runs on seven hits while walking three with four strikeouts. Glaser got the final two outs but Miami had the lead 6-5.

Two base hits and a walk loaded the bases full of Tigers and then Steve Pyzik, who had hits in his first two at bats, drew a walk to equalize the score 6-6. Riley grounded out to the pitcher to end the inning. Miami reclaimed the lead for good with a run in the bottom half of the inning when Kevin Howard scored on a ground out by Kris Clute.

The Hurricanes added a pair of runs in the seventh to go up 9-6 and then the Tigers got them back in the top of the eighth thanks to a two-run home run by Michael Johnson. It was his fifth consecutive game with a home run, which ties the school record. Mathew LeCroy had five straight games with a home run in the 1996 season. Johnson has now hit a home run in seven of his last eight games. Clemson trailed by just one run, 9-8, going to the Miami eighth when the Hurricanes added another run to put them up 10-8.

Clemson mounted a rally in the ninth thanks to Pyzik’s third hit of the game. He advanced to third on two wild pitches. Riley struck out looking for the second out of the inning. Kyle Frank flew out to left field to start the inning. Stone laid down a bunt that got past the pitcher and had to be fielded to first where a running George Huguet, the relief pitcher, made the called out at first base to end the game.

The two teams will continue the best-of-three series in the Super Regional Saturday with a 7:00 PM first pitch. The game will be televised on the Sunshine Network in conjunction with Comcast. All postseason games will be broadcast on the Clemson Tiger Network.