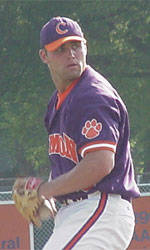 CORAL GABLES, FL – Miami erupted for eight runs in the top of the seventh inning to break a 4-4 tie en route to a 14-6 victory Saturday night in the Super Regional in front of a sellout crowd of 5,236 at Mark Light Stadium. The victory sent the Hurricanes to their 19th appearance in the College World Series, their first since 1999, when they won the national championship. The loss eliminated the Tigers and kept them from a return trip to Omaha where it ended the 2000 season.

The Hurricanes took advantage of six Clemson pitchers in that decisive inning. Paul Harrelson got the loss for the Tigers after allowing the go-ahead run to score off a double by Kevin Mannix that scored Kevin Howard who walked to lead off the inning. Kevin Brown’s singled scored two more runs before a three-run homer by Charlton Jimerson more than sealed the Hurricane victory.

“Our pitching couldn’t contain their hitting and that was the difference,” said Clemson coach Jarrod Schmidt pitched a tough, hard game. He got us going and kept us in the game, but give credit to their running game. They exploited our weaknesses.”

Miami took a 1-0 lead in the second inning on a lead-off home run by designated hitter Danny Matienzo that just cleared the 330-feet sign in right field. Clemson starting pitcher and designated hitter Jarrod Schmidt led off the Clemson second with a home run off the screen in center field.

The Hurricanes took a 2-1 lead in the top of the fourth inning. Kevin Howard led off the inning with a base hit through the right side and then Matienzo hit a ball to left fielder to Casey Stone, who dropped the ball for the Tigers’ second error of the postseason. Schmidt walked Mannix to load the bases and then got Kevin Brown to pop up in foul territory to catcher Steve Pyzik for the first out. Miami got its go-ahead run when Kris Clute reached on a fielder’s choice to bring home Howard.

Clemson tied the game at 2-2 in the bottom of the fourth thanks to back-to-back doubles by Khalil Greene and Schmidt. The Tigers moved Schmidt to third on a ground out by Michael Johnson but failed to bring him home when Pyzik lined out to short right field.

Miami put up to runs in the fifth inning to re-take the lead. The Hurricanes had singles and a sacrifice bunt to get two runs for a 4-2 lead. Clemson got one run back in the bottom of the inning when Jeff Baker singled to score Chad Coder, who had reached with a single of his own to start the inning.

The Tigers used back-to-back doubles for the second time of the game to tie the contest 4-4 in the sixth inning. Schmidt had his second double of the game and Johnson doubled to plate Schmidt. Clemson left the bases loaded after Kyle Frank and Ryan Riley were both hit.

After giving up the biggest inning of the season – eight runs – the Tigers added runs in each the eighth and ninth innings.

Mike Rodriguez and Matienzo were both 3 for 5 on the night to lead Miami. Matienzo knocked in four runs and scored twice. Schmidt was 3 for 4 with two RBIs and scored to runs to pace the Tigers.

Miami was perfect on 10 stolen base attempts to tie the NCAA Tournament record. Clemson, ironically, was the last team to steal 10 bases in an NCAA Tournament game which it did in the 1988 season against St. John’s. The Hurricanes entered the game as the best base-stealing team in the country with 205 stolen bases. Mike Rodriguez, Javy Rodriguez and Jimerson each three stolen bases apiece and Howard added another.