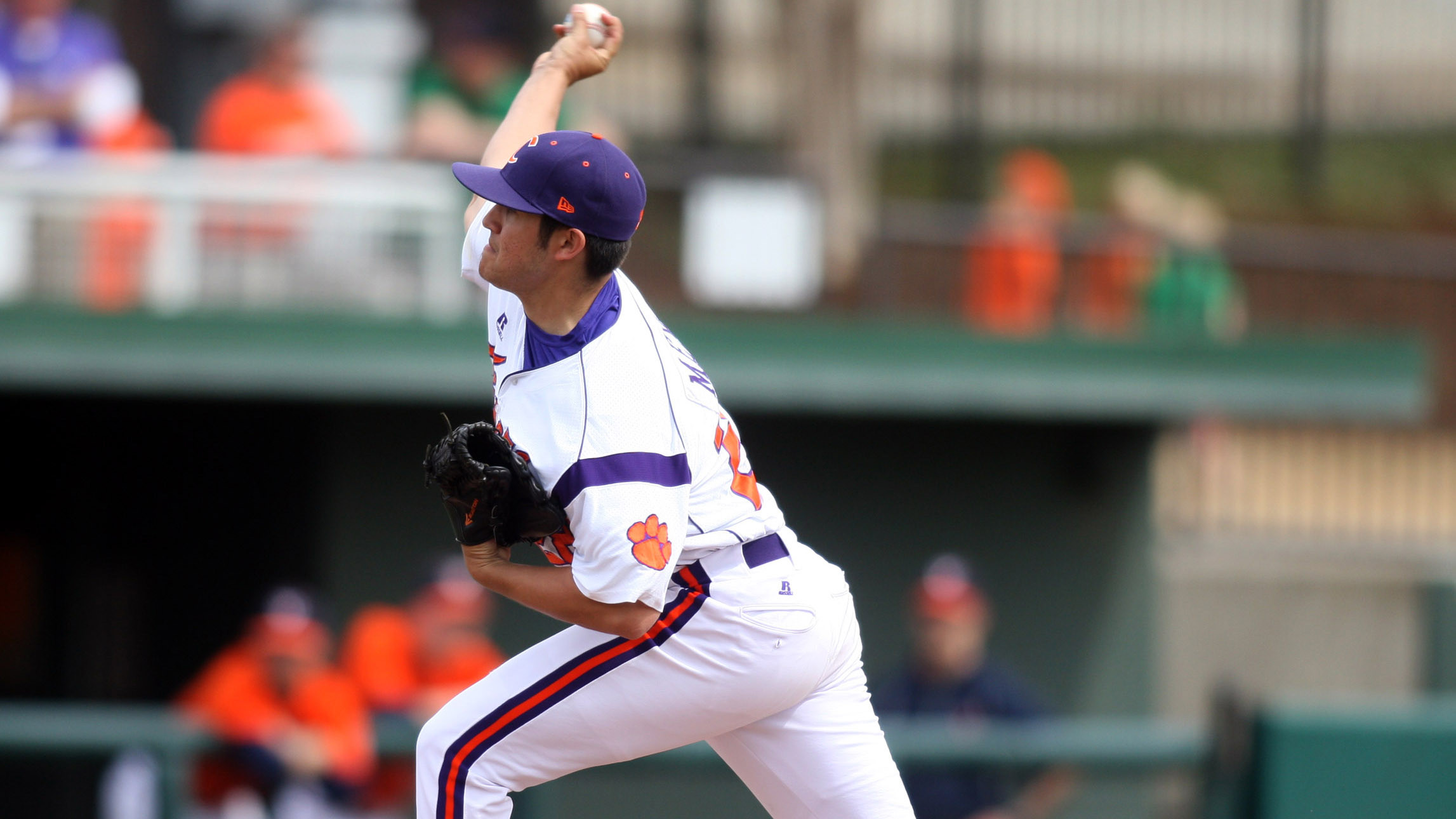 Senior righthander Jonathan Meyer tossed 7.0 strong innings to lead Clemson to a 4-1 win over Gardner-Webb at Doug Kingsmore Stadium on Wednesday night.  The Tigers improved to 18-11, while the Bulldogs fell to 15-13-1.

The Tigers scored two runs in the first inning on Garrett Boulware‘s two-run homer and added a run in the fourth inning before the Bulldogs manufactured a run in the seventh inning.  Trailing 3-1, Gardner-Webb loaded the bases with one out in the eighth inning before Clemson got out of the jam with a crucial double play.

Meyer (2-0) pitched 7.0 innings in a starting role to earn the win in his first start of the season.  The San Diego, CA native gave up five hits, one run, and no walks with six strikeouts in throwing 83 pitches (60 strikes).  Kyle Schnell pitched a scoreless eighth inning, then Matt Campbell recorded his fifth save of the year by pitching a hitless and scoreless ninth inning with two strikeouts.

Conner Scarborough (1-4), the first of eight Bulldog hurlers, suffered the loss.  He yielded four hits, two runs, and one walk in 2.0 innings pitched.

The Tigers wasted little time taking the game’s first lead in the first inning.  Steven Duggar reached on an infield single with one out, then Boulware belted a two-run homer to left field, his fifth long ball of the season.  Scarborough had only allowed one extra-base hit in 28.1 innings pitched in 2013 prior to Boulware’s home run.

In the fourth inning, Thomas Brittle grounded a two-out double over the first-base bag, advanced to third on a fielding error by rightfielder Danny Yelverton, and scored when second-baseman Scott Johnson muffed Yelverton’s throw to the infield, giving Clemson a 3-0 lead.

The Bulldogs broke through with their first run in the seventh inning when John Harris lofted a sacrifice fly to center to score Benji Jackson, who led off the inning with a double to right-center and advanced to third on Brad Collins’ flyout to right.

In the top of the eighth inning, Johnson was hit-by-pitch with one out, then JJ Nazzaro singled through the right side.  After Yelverton walked to load the bases, Scott Coleman hit a soft liner up the middle.  Schnell caught the ball and threw to third for the inning-ending double play.

Shane Kennedy led off the bottom of the eighth inning with a double to right-center that fell between two outfielders due to miscommunication.  Tyler Krieger grounded out to second to move Kennedy to third, then Joe Costigan flared a double down the left-field line to score Kennedy.

In the ninth inning, Harris drew a two-out walk, but Sam Fulginiti struck out to end the game.

Brittle went 3-for-4 with a double, run, and steal to lead Clemson, who outhit the Bulldogs 10-6.  Duggar, Boulware, and Kennedy added two hits apiece.  The Tigers also totaled five stolen bases in the contest.

Jackson and Fulginiti had two hits apiece to pace Gardner-Webb.

Clemson will travel northward to take on Boston College in a three-game series at Chestnut Hill, MA starting Friday at 2:30 PM.