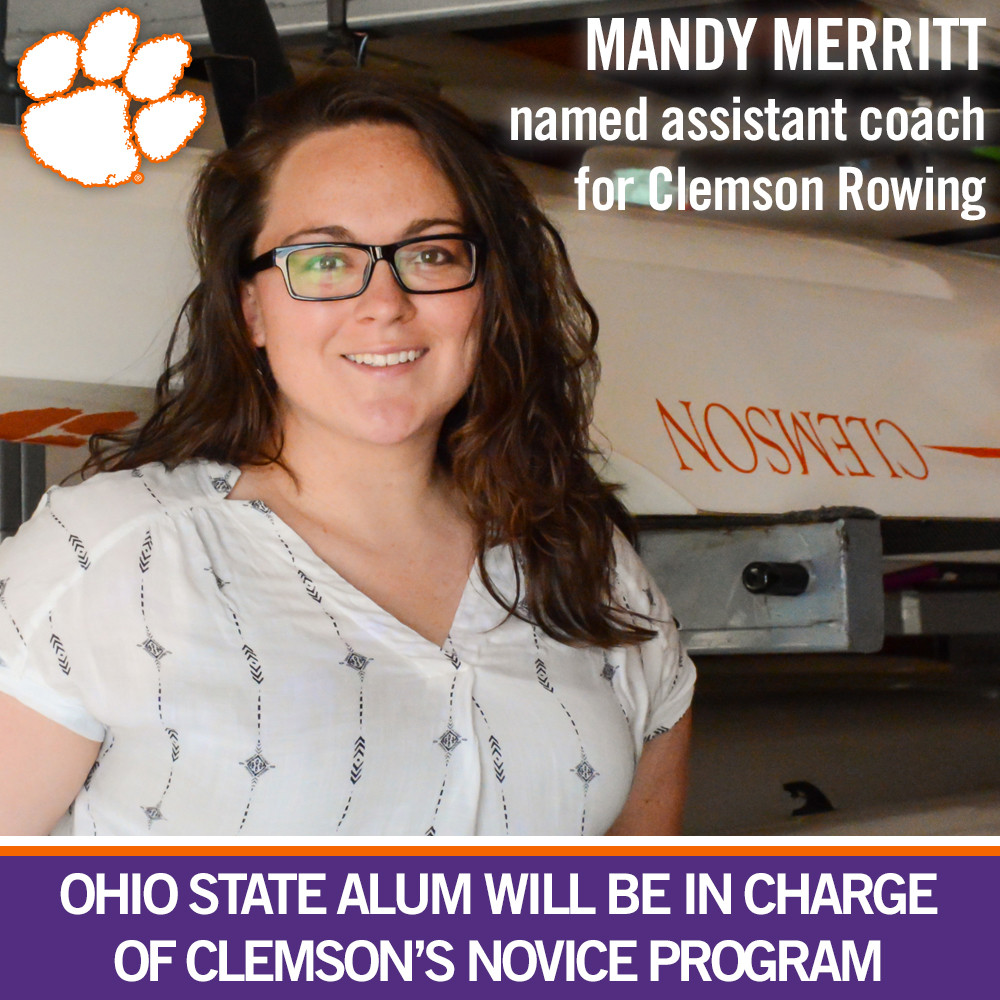 CLEMSON, S.C. — Head coach Stephen Frazier Wong announced the addition of Mandy Merritt to the Clemson rowing staff as an assistant on Thursday. Merritt joins the Tigers after three seasons at West Virginia, and will be in the charge of the novice program.

“The number one thing I saw in Mandy is toughness,” Frazier Wong said. “When we identified the direction we wanted to go two years into our program and what our team needs, we wanted a toughness on a daily basis.

“She was a walk-on at Ohio State who won a Big Ten Championship, which speaks to her toughness. She brings the type of edge our program sorely needs. She is passionate and can get the most out of the student-athletes with whom she works. We want to be the toughest team each and every race, and Mandy will help reinforce that for us.”

Merritt was in charge of the novice program during her time at West Virginia. Her crews earned several medals during her time with the Mountaineers at the Knecht Cup and Head of the Occoquan. This past spring, she coached WVU’s Third Varsity 8+ and the Varsity Fours for the Big 12 Championships.

“The prospect of being in the ACC, one of the most competitive conferences, was a big draw,” Merritt said. “You know Clemson in the rowing world because of its history and facilities. It’s exciting to think about being a part of that culture. I hope to bring some of my competitive fire for the sport to the student-athletes.

“When I interviewed with Stephen, we discussed the attitude and mindset he wanted in the program. I’m excited to be part of a collaborative staff with one goal in mind.”

Prior to her time in Morgantown, she was a volunteer assistant at her alma mater, Ohio State, for two seasons. In her two seasons, she helped the Buckeyes’ Second Novice 8+ to a silver medal at the 2012 Big Ten Championships. Merritt also assisted with on-campus recruiting.

Merritt was a three-year letterwinner and three-time Academic All-Big Ten performer at Ohio State. As a senior, she was a member of the Second Varsity 8+ that won a gold medal at the Big Ten Championships and went on to place fourth at the NCAA Championships. She earned undergraduate degrees in strategic communication and cultural comparative studies in June 2011.