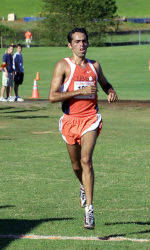 Clemson, SC – The men’s track & field team scored 220 points and won convincingly at the Clemson Invitational on Saturday. A total of 12 athletes posted regional-qualifying marks, including five from Clemson.

The 4x100m relay team of Cheney, Brown, Padgett, and Mills finished first in a tight race with Western Carolina. The Tigers posted a time of 40.67, just shy of a regional mark. The Tigers’ team of Mills, Cheney, Brown, and Porter was first with a time of 3:13.78, which was a season-best effort by Clemson.

In the discus, Danny Alge was runner-up with a toss of 159’8″, while Hobbs (124’7″) and Feathers (123’3″) also competed in that event. Alge also finished second in the hammer throw after posting a regional mark of 188’10”. That mark did not improve on his personal best, but it was his second regional-qualifying effort in as many tries this season. Koontz finished sixth in the javelin with a throw of 164’5″, while Hobbs was seventh (162’6″) and Feathers eighth (155’10”).

The Tigers return to action on April 15 to take part in the Solid Orange Classic at the Rock Norman Track & Field Complex.